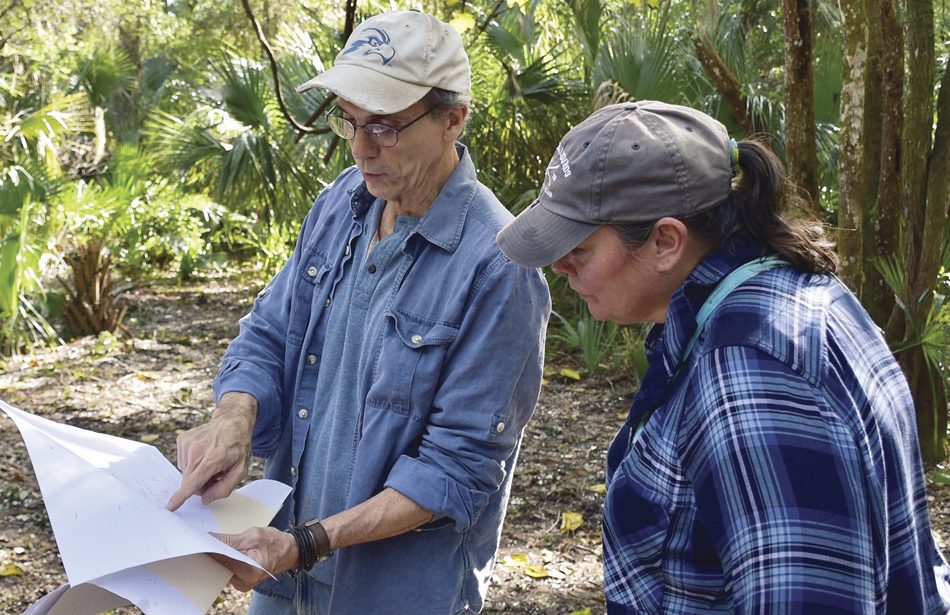 Located on Big Talbot Island south of Amelia, a University of North Florida archaeology dig makes a discovery that gives voice to the indigenous people of Northeast Florida.

Dr. Keith Ashley, University of North Florida (UNF) Archaeology Lab director and assistant professor, is giving a voice to the indigenous people who lived in Northeast Florida. Through his discoveries, he is telling their story, and he and his team are doing it one shovelful of dirt at a time.
In November, Sherry Carter and I met with Dr. Ashley on Big Talbot Island at the site where he and his students have made an incredible discovery. After 23 years of searching for the precise location of the village of Sarabay, Dr. Ashley believes they have found it.
The first excavations conducted by UNF on the southern end of Big Talbot Island began in 1998. I listened as Dr. Ashley explained how they came to the decision to look there, and I realized that I was hearing a genuine story about searching for lost treasure. From Spanish documents dated 1565 that mention Sarabay, along with correspondence from 1602, a map from 1703, and discoveries of “Indian pottery” in the late 1960s, Keith Ashley, Buzz Thunen, and Vicki Rolland initiated a shovel test survey of the south end of Big Talbot Island.
Conducting more than 550 shovel tests over a three-month period, they turned up indigenous San Pedro and San Marcos pottery, along with other clues that warranted a closer look. The three returned with several students to the site they named Armellino, and the UNF field school went to work digging four individual 1-meter by 2-meter units scattered across the area near the site of the original tests.
It’s a time-consuming process. Every shovel of dirt is sifted through, studied, and recorded. Everything matters – even the color of the soil beneath the surface tells a tale. The fourth and last unit had a lot to say and continued to reveal its treasures through the next summer’s excavation in 1999. What began as a shovel test with a small soil discoloration became a large excavation block. An impressive collection of artifacts and features were found, but the most exciting find proved to be a section of a wall trench structure, with an area within the section thought to represent an entranceway to a wood and thatch building.
Covid made things a little harder in 2020 for the students of the field school, but they worked around the obstacles by wearing masks and practicing social distance. A lot of interesting artifacts were found, which continue to help them understand the true history and culture of northeastern Florida’s indigenous population.
This year, they were back again, making more discoveries. Dr. Ashley and the students were able to uncover more of the wall trench structure and unearthed some exciting news. The size of the structure is similar to that of a Council House, which could mean that Dr. Ashley has found the center of Sarabay. The team hopes to ultimately confirm the discovery of Sarabay by finding evidence of houses and public architectures. They will continue to explore and learn about Sarabay’s physical layout during continuing fieldwork projects over the next two years.
Dr. Ashley’s excitement about the project and his love of teaching made me want to know more, and he invited Sherry and me to come to UNF for an exhibit of the items found at the site. Not only was I able to see the treasures up close, but I was also able to hold several pieces in my hand, and I got to meet some of the students who participated in the dig over the summer. They are as excited about learning the history of the indigenous people of Northeast Florida as their professor is.
Dr. Ashley’s finds are an important development because the true story of the Timucuan-speaking Mocama Indians, not vague European descriptions, needs to be heard. To find out more about the artifacts they’ve found, how they conduct their studies, and lots of interesting information, visit keithashley.domains.unf.edu/sarabay/ and the UNF Archeological Lab Facebook page.