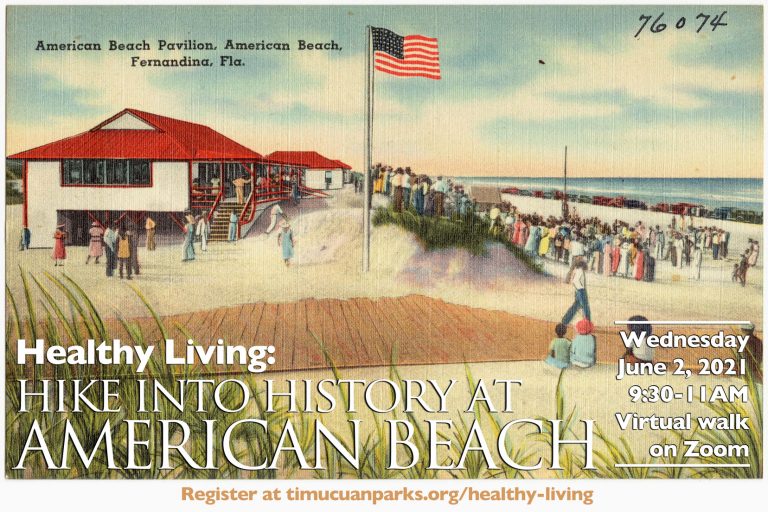 Timucuan Parks Foundation and AARP are hosting “Hike into History” at American Beach, a virtual event as part of their Healthy Living: Fresh Air, Fitness, Friendship and Fun series. On Wednesday, June 2, National Park Service Ranger Ted Johnson and American Beach Museum Director Carol Alexander will be leading a virtual tour through historic American Beach, sharing stories, taking us on a tour of the museum, and visiting some of the community’s most notable sites. The free event will be held from 9:30 a.m. to 11 a.m. on Zoom. Registration is required and can be done at timucuanparks.org/healthy-living.

Ranger Johnson will take visitors on a tour of the historic Black community which is located at the southern end of Amelia Island along State Road A1A. It was developed in 1935 by Abraham Lincoln Lewis to give African Americans access to the beach during the days of segregation. Lewis, president of Afro-American Life Insurance Company and Florida’s first Black millionaire, originally bought 33 acres of shorefront property on Amelia Island and invited African Americans to enjoy the beach and offered parcels for sale to the Black community. He made two additional land purchases over the next 11 years to bring the total acreage of American Beach to 216.

American Beach was a popular tourist destination for African Americans for many years. After the passing of the Civil Rights Act and Hurricane Dora in 1964, tourism in the area declined. In 2002, the original beach property was added to the U.S. National Register of Historic Places. NaNa Dune, the tallest dune in Florida, was added to the National Park Service’s Timucuan Ecological and Historic Preserve in 2004 largely due to the efforts of MaVynee Betsch who died in 2005. Betsch, known as “The Beach Lady,” was a descendant of American Beach’s founder and dedicated the last 25 years of her life to the preservation of the natural integrity of the historic Black community. Betsch’s legacy was the driving force behind the 2014 opening of the American Beach Museum, which serves to “document and interpret the rich tradition and legacy of African Americans’ ingenuity, perseverance and achievements.”

The Healthy Living series is a partnership between TPF and AARP and is designed to promote healthy living and the therapeutic effects of the local parks and preserves. For more information, contact Timucuan Parks Foundation, at [email protected]  or call (904) 374-1107.