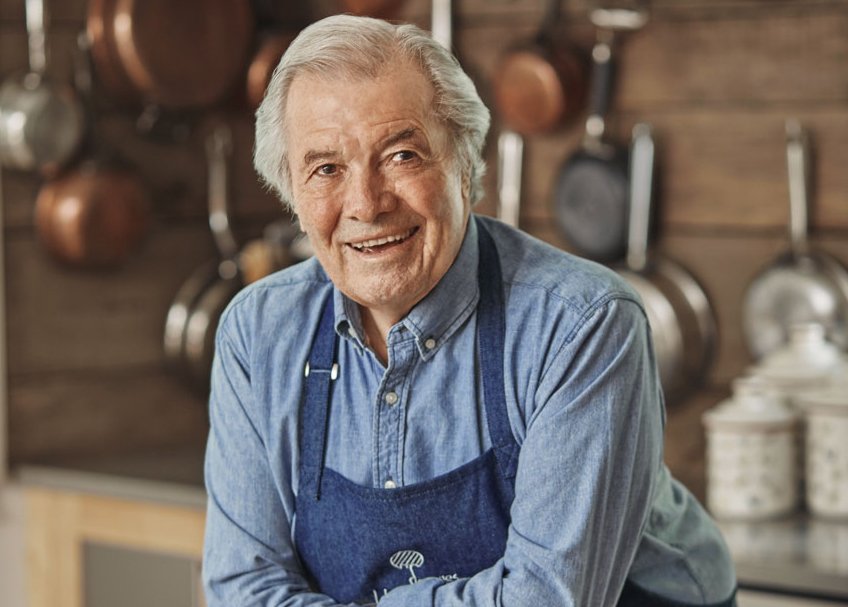 After visiting for a petanque tournament in 2012, Chef Jacques Pépin now spends the winter months on Amelia Island, where he also enjoys painting, his second passion.

Jacques Pépin, the iconic chef, television host, cookbook author, instructor, and artist, is also a beloved member of our Amelia Island community. This charming and unassuming man has captured the hearts of culinary fans around the world, and his accomplishments continue to grow. Winner of 16 James Beard Awards and author of over 29 cookbooks, Pépin has starred in 12 acclaimed PBS cooking series and is the recipient of three of the French government’s highest honors: La Légion d’Honneur, Chevalier des Arts et Lettres, and Mérite Agricole. He is currently the Dean of Special Programs at the International Culinary Center in New York, an adjunct faculty member at Boston University, and Oceania Cruises’ Executive Culinary Director.

During the winter months, you’ll find Jacques, his wife, Gloria, and their poodle, Gaston, enjoying the restaurants, stores, and farmers markets on Amelia Island, and of course, playing pétanque. But what Jacques really loves is sharing his books and knowledge with his ever-expanding legion of fans. He can often be found at Story & Song Bookstore Bistro and the Book Loft for book signings, special events, and even cooking demonstrations.

“We celebrate each time he and Gloria return to the island with a special luncheon and art show, and we talk about food, family, community, and pulling everything together around the table,” says Donna Paz Kaufman, owner of Story & Song Bookstore. Amelia island has become a place where he can unwind, find inspiration, and paint. “Jacques came here for boules, and he loves to stay in town to be around people. He has such a generous spirit, and he loves giving to the community,” says longtime friend Kate Harris. “This is his inspiration island.”

The Pépins first came to Amelia for an extended stay in 2012 for the international Pétanque Amelia Island Open. For years, Philippe Boets, president of Pétanque America, had been shipping boules to Gloria and Jacques in Connecticut. In 2009, when Philippe decided to move his organization to the island, Gloria asked him what it was like. Philippe told her, “If you put Key West in a blender with Nantucket and sprinkle in a bit of Georgia, that’s Amelia Island.”

“I’m so grateful to Jacques,” says Philippe. “When I organized the first tournament on the island in 2009, he and his friends were excited to fly down and join in the competition. He even offered to do a book signing. You have no idea how many people came for Pépin, and then discovered pétanque!”

In 2019, Jacques was honored with the Lifetime Achievement Award at the Daytime Emmy Awards, where he was recognized for his career as a television icon. Many of us know him through his cookbooks and TV episodes with Julia Child, but did you know that he is also a successful artist? “I have been cooking for more than 60 years, and I have been painting sporadically for half a century. Both are part of who I am, how I feel, and how I react to a sensual or esthetic experience,” he explains.
Jacques applies the same focus and technique used in his cooking to his paintings. During his time on Amelia over the years, Jacques has discovered inspiration in everything from the beaches and tree-lined drives to the simple beauty unique to our island. His extensive collection can be found on his website at jacquespepinart.com.

In 2016, the Jacques Pépin Foundation was created with his daughter, Claudine, and his son-in-law, Rollie Wesen, to provide culinary training to disadvantaged people. Through their website, jp.foundation, people can access his latest videos, demonstrations, and learn how to support those in need. The foundation is working with leading chefs to teach volunteers how to cook healthy meals using ingredients found in local soup kitchens. In addition, a new membership program was just launched wherein members will have access to special digital publications, exclusive events, artwork, and much more.

Today, during the Covid pandemic, Jacques has turned to Facebook and other virtual venues to share his craft. Working from home in his studio kitchen with longtime friend and photographer, Tom Hopkins, Chef Pépin is bringing families back together around the table. “He is the consummate adapter. Stuck at home from Covid, out of an ingredient? Take what you have, get your family together, and don’t forget the wine,” shares Kate Harris. Showcasing his recent efforts to encourage more home cooking with less stress is his newly released cookbook, Jacques Pépin, Quick & Simple. In it, he shares streamlined techniques and how anyone can make good use of everyday ingredients.

Currently, Jacques continues to write, produce videos, and paint. He and Gloria are safely ensconced in Connecticut and look forward to their next rendezvous on Amelia. In the meantime, you can learn from one of the world’s greatest chefs by visiting him on Facebook (Facebook @ChefJacquesPépin), on Instagram, or at jacquespepin.org, where you will find treasures and simple pleasures.