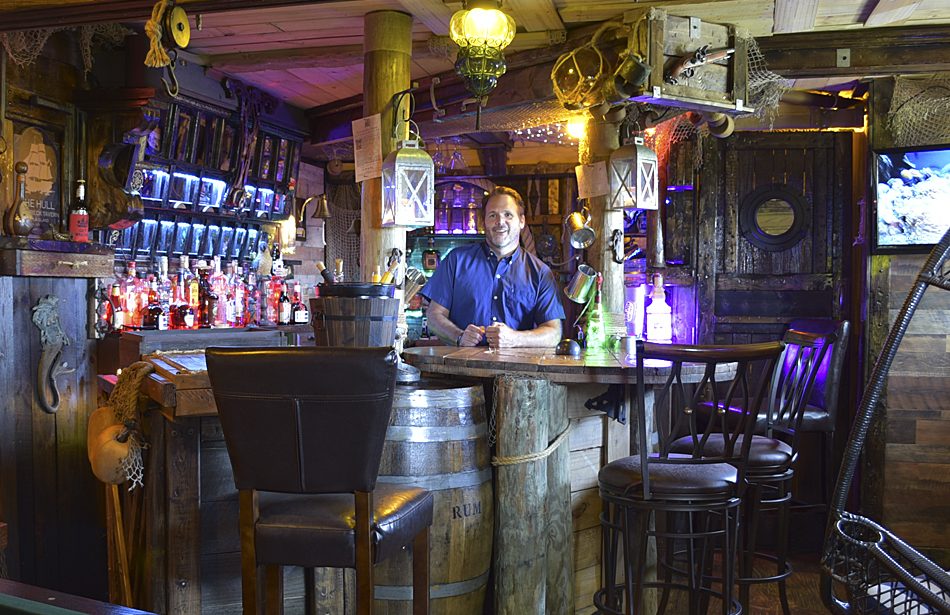 Looking out the window in the bottom level of his new home, Jeff Cummings felt like he was in the hull of a ship, inspiring him to construct one of the great man-caves of all time.

Not long after Jeff and his family moved into their house by the Amelia River, he and his son, Pace, were looking through a window from the bottom level out over the marsh. He turned to his son and said, “I feel like I’m looking out of the hull of a ship.” Almost immediately, Jeff, a carpenter disguised as a day trader, went to work turning the space into one of the most unique man caves you will ever see.

Before you open the door to enter what Jeff has named The Hull Shipwreck Tavern, you notice Jeff’s attention to detail. The rum barrels, weathered boards, and copper relief sign with wrought iron accents are just a teaser of what lies ahead.

When you step through the door onto a concrete floor painted to look exactly like the heavy oak planks from the inside of a pirate ship from the 17th or 18th century, your legs automatically brace themselves for the rocking motion of the waves you’re sure are right on the other side of the wall.

The bar to the right catches your eye immediately. Constructed from tequila barrels and a large wooden wire spool—and thanks to Jeff’s creative mind, artistic talent, and fertile imagination—it looks like something straight off the Pirates of the Caribbean movie set. I was really impressed by how Jeff was able to turn ordinary things into realistic-looking period pieces.

Jeff put a lot of thought into each detail. Everywhere you look, you find a fun and interesting conversation piece. To give the impression of the entrance to the Captain’s Chambers, he designed and constructed a mirror that hangs behind the bar, and he even built cannons from scratch. For the cannons, Jeff started with pilings and spackle and finished with three awesome cannons for his ship. The space has so many cool touches, but for me it’s the lanterns, flickering candles, and the custom-built overhead light that create the greatest impact.

“The lighting really gives the feel of being in a ship’s hull,” Jeff says, and he’s absolutely right. It looks and feels like sunlight shining down through the boards of the top level of a ship. The more you look around the tavern, the more there is to see. Like cannon balls (painted bocce balls), liquor bottles (with custom-made Fernandina Beach and Amelia Island-themed labels designed by Jeff) mixed in with the real bottles behind the bar. Wooden crates and cabinets that would hold gun powder, ammunition, spare wooden peglegs, or whatever a pirate would store in his ship are used for storage for normal things like tools and electronics.

The Cummings, originally from the Carolinas, were intrigued by the colorful pirate history of Amelia Island, so Jeff incorporated that into the design with Wanted Posters of some of Amelia Island’s most notorious pirates and plunderers on the wall, along with replicas of swords and other weapons from that era.

It only took Jeff 15 months to complete the space, but he continues to add to his collection of nautical treasures, thanks to friends. His realtor, who is also an antique collector, gifted Jeff an antique wheel from a ship.
When Jeff and his wife aren’t entertaining friends, Jeff uses his unique space as an office. “I love college football, so there are three TV’s down here. I discovered I can’t handle three games at once, but I do watch two games at a time.”

I spy a plastic Macaw in a hanging cage. “His name is Bodie,” says Jeff. “He’s the mascot of Shipwreck Tavern.” I find a couple of other parrots in different places. “They’re all named Bodie,” laughs Jeff’s wife, Kimberly.
Jeff’s mancave is the place where everyone loves to hang out, but the full bar and pool table are just bonuses. It’s obvious Jeff had lots of fun creating his unique space, and when you’re standing in The Hull Shipwreck Tavern, that feeling is contagious. A flagon of grog to your health, matey! 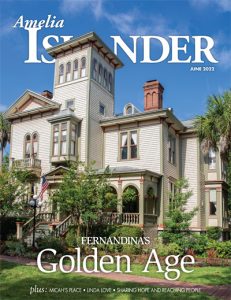