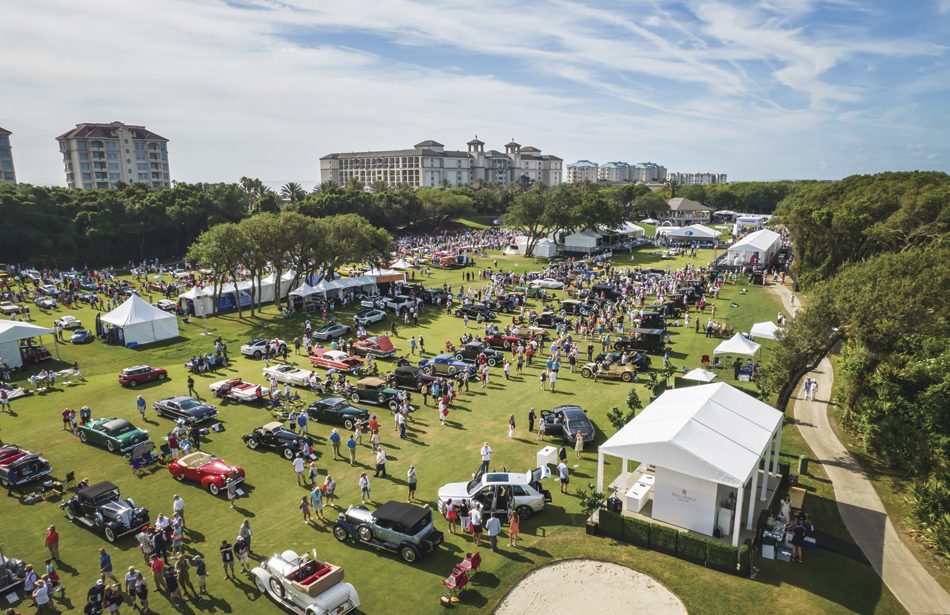 With Hagerty at the helm, this year’s The Amelia is an iconic automotive celebration, with 2022 Honoree Chip Ganassi, new Cars & Community events, and Sunday’s Concours.

Armed with decades of experience hosting car-centric events and a mission to preserve driving and car culture for future generations, Hagerty is very excited to take over as the host of “The Amelia.” In 2021, the Amelia Island Concours staff joined the Hagerty team and continue to provide their unmatched expertise and historic knowledge on how to run a successful, legendary automotive event. This year promises to deliver the same celebratory, iconic energy of the events from previous years, with even more opportunities to delight car lovers of all ages.

The Amelia’s new logo design showcases the event’s framed initials and represents Hagerty’s goal to save driving and car culture for future generations. “The Amelia is truly a motoring event like no other, and we wanted a logo that reflected its strength and uniqueness,” says Tarra Warnes, Hagerty’s Vice President of Creative Strategy.

The Amelia is a multiple award-winning motoring event, held this year from March 3 to March 6 at The Golf Club of Amelia Island and The Ritz-Carlton, Amelia Island. Luxury shopping, auctions, new vehicle reveals, experiential drives, exclusive gatherings, and entertaining seminars surround Saturday’s Cars & Community and Sunday’s Concours d’Elegance. Each year, The Amelia honors a racing legend and attracts celebrities from across the automotive landscape.

A Jacksonville native, Bill Warner had a long and successful career in the automotive industry before The Amelia even started. In 1996, after years of working as an automotive photographer, journalist, and driver, the public relations team from The Ritz-Carlton, Amelia Island reached out to Warner in hopes of finding a champion to build an automotive event on their grounds. Warner didn’t consider himself a “Concours guy,” but he agreed to help with the caveat that the show give back to the community.

The inaugural event took place in April 1996. Warner used his connections in the automotive world to advertise, report on, and sponsor the event. The Amelia would attract personalities from across the automotive landscape, from legendary drivers who would serve as the event’s yearly honorees to automotive designers, television personalities, and industry executives. Without Warner, along with his small, dedicated staff and an incredible group of volunteers, The Amelia would never have been what it was then or what it has become today.

Warner and his team’s hard work hasn’t gone unnoticed. The Amelia won the coveted “Motoring Event of the Year” distinction from the International Historic Motoring Awards in both 2013 and 2016. But The Amelia is not just about cars. Since it began, the team has donated over $4 million to Spina Bifida of Jacksonville, Community Hospice & Palliative Care, including the Jane and Bill Warner Center for Caring, located in Fernandina Beach, and other deserving charities from Florida’s First Coast.

RACING LEGEND CHIP GANASSI HONORED AT THE AMELIA IN 2022
Racing legend Chip Ganassi will serve as Honoree of The Amelia this year. Ganassi has touched every major form of North American motorsport, as well as the ultimate international road race, the 24 Hours of Le Mans. He has been a fixture in the auto racing industry for over 30 years, and in addition to being an accomplished driver, he is one of the most successful and innovative owners in the sport. The Chip Ganassi Racing stable currently includes eight highly successful teams: four in the NTT IndyCar Series, two in the NASCAR Cup Series, and one each in the IMSA WeatherTech SportsCar Championship and Extreme E.

Overall, his teams have 20 championships and more than 225 victories, including four Indianapolis 500s, a Daytona 500, a Brickyard 400, eight Rolex 24 at Daytonas, the 12 Hours of Sebring, and 24 Hours of Le Mans. Ganassi boasts state-of-the-art race shop facilities in Indianapolis and Concord, North Carolina, with a corporate office in Pittsburgh.

“Honoring a hero from the racing community is an important component of The Amelia DNA,” says McKeel Hagerty, CEO of Hagerty. “From the inaugural Honoree, Sir Stirling Moss, to last year’s celebration of Lyn St. James, The Amelia has anchored the celebration of the automobile to the incredible people who have devoted their lives as ambassadors for driving.”

Ganassi made his racing debut in the 1981 Robert Bosch Super Vee Championship. In 1982, after graduating with a finance degree from Duquesne University, he started his first Indianapolis 500 in Mario Andretti’s year-old 1981 Wildcat/Cosworth. Ganassi was the fastest in a star-studded rookie class, qualifying ahead of future Indy 500 winners Bobby Rahal and Danny Sullivan. A year later, he scored two podium finishes, placed ninth in the IndyCar Championship standings, and was voted Most Improved Driver.

After a brutal high-speed accident at Michigan International Raceway in 1984, Ganassi retired as an Indy car driver. His final race in the cockpit was in the 1987 24 Hours of Le Mans. Three years later, Ganassi founded Chip Ganassi Racing, which became the only team to win the Daytona 500, Indianapolis 500, NASCAR’s Brickyard 400, and the 24 Hours of Daytona in a 12-month span. CGR’s success includes eight victories in the 24 Hours of Daytona, two streaks of four consecutive IndyCar Championships, four Indianapolis 500 victories, including a 1-2 finish in 2012.

In Ganassi’s return to Le Mans in 2016, his team did not disappoint, scoring another historic Le Mans victory for Ford in the CGR’s first Le Mans attempt. The landmark victory came on the 50th anniversary of Ford’s historic first overall Le Mans victory in 1966. In 2011, Ganassi received an honorary Doctorate from Carnegie Mellon University in his hometown of Pittsburgh, and he was inducted into the Motorsports Hall of Fame of America in 2016.

EIGHT FLAGS ROAD TOUR AND THE PORSCHE DRIVING EXPERIENCE
The Amelia Kicks off on Thursday, March 3, with its beloved Guardians of Porsche Wine Makers Dinner, held at The Ritz-Carlton, Amelia Island, along with RM Sotheby’s Preview Party, an exclusive invitation-only event that gives attendees a sneak peek at cars that offered at auction on Saturday.

On Friday, March 4, The Amelia is in full swing with its Reliable Carriers Eight Flags Road Tour. The Tour stops at various points on and around Amelia Island and concludes with a public display and lunch in historic downtown Fernandina Beach. Also on the docket is 36 Hours of Florida Friday Seminar, hosted by Ray Evernham, an analyst with ESPN’s NASCAR coverage. A three-time Winston Cup Series champion with driver Jeff Gordon, Evernham won the NASCAR Winston Cup Illustrated “Person of the Year” and was later inducted to the NASCAR Hall of Fame in 2018.

Friday’s events also include the Manufacturers Ride & Drive at The Ritz-Carlton, Amelia Island and a favorite annual event, the Porsche Driving Experience at Fernandina Beach Municipal Airport. Open to the public, participants will enjoy activities including an autocross in one of the latest Porsches and a spirited ride with a professional driver.

CARS & COMMUNITY AND THE RM SOTHEBY’S AUCTION
On Saturday, March 5, The Amelia presents Cars & Community, presented by Griot’s Garage, held at The Golf Club of Amelia Island. This unique day of automotive family fun includes Cars & Caffeine, a 1980s and ’90s-focused RADwood display, the fun and low-brow Concours d’Lemons, and The Amelia’s first-ever Kids Zone, all for the price of a single ticket.

A portion of every Cars & Community ticket sold will support local and national charitable partners. Saturday’s seminar, NASCAR, is also presented by Ray Evernham at The Ritz-Carlton, Amelia Island. And you won’t want to miss RM Sotheby’s exciting auction presenting approximately 150 of the world’s most sought-after blue-chip automobiles. The auction is also held at The Ritz-Carlton, Amelia Island on its Oceanfront Lawn and Courtyard.

PORSCHE ALUMINUM RACE CARS AND 24 HOURS OF DAYTONA
On Sunday, March 6, from 9:30 a.m. to 4 p.m., it’s what we’ve all been waiting for: The Amelia Concours d’Elegance, featuring over 225 rare vehicles from collections around the world, for a celebration of the automobile like no other! Held at The Golf Club of Amelia Island, attendees will be wowed by historic vehicles from private collections that celebrate Ferrari’s 75th Anniversary. In another division, attendees will enjoy a celebration of Waterhouse, the coachbuilder based in Webster, Massachusetts, that produced high-quality custom bodies for chassis supplied by the major automotive businesses. Also featured is a dynamic collection of Porsche Aluminum Race Cars.

Porsche AG’s first fully purpose-built racing car came in 1953 in the form of the 550 Spyder. The first major win for the 550 came at the 1956 Targa Florio, driven by Umberto Maglioli. The 550 was further developed into the 718 RSK, another successful winning racer. These wins by the light, small-displacement Porsche race cars against large-displacement 12-cylinder racers, such as Ferrari, gave them the reputation of “Giant-killers.”

Sunday’s Concours d’Elegance also celebrates the 60th anniversary of the 24 Hours of Daytona. Key moments in Daytona 24-Hour history come to life with cars that helped make that history possible. Along similar lines, The Amelia is also celebrating the 70th anniversary of the 12 Hours of Sebring, a race held annually at the Sebring International Raceway in Sebring, Florida. Other than the 24 Hours of Daytona, the 12 Hours of Sebring is the biggest and most popular American endurance racing event.

THE 1932 FORD ROADSTER AND THE SUPERCAR CELEBRATION
If you’re into hot rods and hot rod culture, you won’t want to miss the 90th anniversary of the ’32 Ford Roadster. The ’32 Roadster is a legend to hot-rodders all over the world, and this collection will not disappoint. Be sure to bring your camera! Additionally, Concours features will include the interesting vehicles of the Davis Motorcar Company, Indy roadsters, and the 100th anniversary of Lincoln.

The Amelia’s inaugural Supercar Celebration will be presented on Saturday and Sunday on the main show field. Representatives from the past four decades of supercars will be display. Vehicles scheduled to appear include highlights from Ferrari, Lamborghini, Koenigsegg, Scuderia Cameron Glickenhaus, BMW, and more. Throughout the weekend, The Amelia’s Silent Auction is not to be missed. A collection of unique, rare, and eclectic film, television, automotive, and autographed sports-related items can be found in this popular area of The Ritz-Carlton, Amelia Island.

From autographed automobilia, original paintings, and celebrity autographed items to gift certificates from local and international destinations, there is something for everyone, including a section set aside just for children to bid. For the connoisseur, fine jewelry, collectible watches, original art, and autographed limited-edition prints are available for sale. The Amelia has donated over $4 million since 1996 to Community Hospice & Palliative Care, Spina Bifida of Jacksonville, Shop with Cops, and other worthy charitable organizations across North Florida.

For more information and complete schedule, and to purchase tickets for their various events, visit The Amelia’s web site at www.ameliaconcours.com. You’ll find the most up-to-date announcements about the 2022 show, as well as what has happened over The Amelia Concours d’Elegance’s past twenty-six years. Since 1996, The Amelia has featured some very significant cars, drivers, and concepts. Feel free to go back in time to relive the highlights!