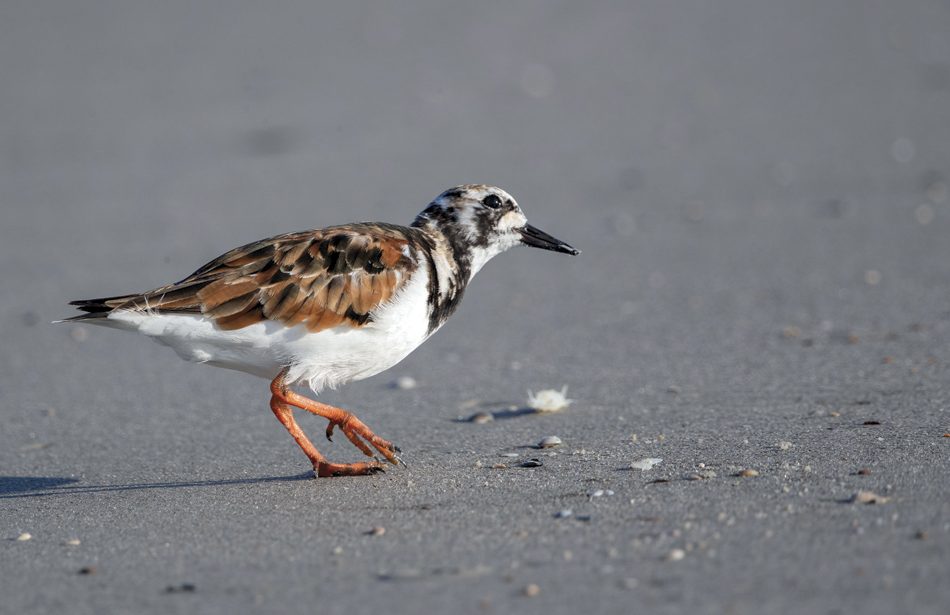 While you enjoy the beach this summer, don’t forget that we share the sand with a variety of amazing shore birds, from the American Oystercather to the tiny Least Tern.

Ahhh, summertime! The stage is set to enjoy our beautiful sandy beaches, sea shells, shrimp, and sunshine. But people aren’t the only ones interested in eating shrimp and staying at the beach. An assortment of beautiful and amazing birds live here, too. In many cases, their very lives depend on the things found along our coast.

We can always find an interesting assortment of shorebirds here on Amelia Island, including the American Oystercatcher, which is the largest of our shorebirds. With his red-yellow eye, deep red eye ring, and black head, this species looks dazzling on the sand. Their wingspan is approximately 32 inches!

Compare that to our smallest shorebirds, such as the Least Tern, which have wingspans of only 19 inches. Oystercatchers eat insects and jellyfish, but their primary food source is mollusks. They use their powerful bright red-orange bill as a shucking tool to open shells. In Florida, American Oystercatchers are considered a threatened species.

The Ruddy Turnstone is a colorful shorebird species with bright orange legs. The Sibley Guide to Birds describes them as “relatively short-legged with a short, pointed bill. Their calico plumage pattern with dark breast and white belly is distinctive.” You may see them year-round along the water’s edge or on jetties. They eat insects, including bees and wasps, as well as mollusks and small fish.

Another shorebird found in our area is the Royal Tern. Cornell University’s website allaboutbirds.org says, “A sleek seabird, the Royal Tern lives up to its regal name with a tangerine-colored bill and ragged, ink-black crest against crisp white plumage. Royal Terns fly gracefully and slowly along coastlines, diving for small fish, which they capture with a swift strike of their dagger-like bills. They are social birds, gathering between fishing expeditions on undisturbed beaches and nesting in dense, boisterous colonies.”

In some places, nesting season is in full swing for Royal Terns right now, so watch for them when you visit the beach. You may even get to see some of their beautiful courtship behaviors, which happen in the air and on the beach.

Mated pairs spiral through the air very close to each other. On the beach, watch for the male to present the female with a food treat and even bow to her! Like many of our shorebirds Royal Terns nest right on the beach. They are masters of camouflage; their eggs and chicks are hard to see, so be cautious where you walk or drive.
The smallest tern species in North America, the Least Tern also nests here, as do Wilson’s Plovers. Least Terns are listed as threatened in Florida. Like the Wilson’s Plover and others, their “nest” is only a small, scraped-out spot directly on the beach.

Shorebird species vary with our seasons. Keep your eyes to the skies, and you may find Willets, Black Skimmers, Killdeer, Wilson’s Plovers, or even the long-distance migrator, the Red Knot. The diminutive Piping Plover flies hundreds of miles to spend the winter with us.

Most people know the plight of the endangered sea turtles that visit us. Not nearly as many know that we share our home with threatened and endangered bird species, which is also a big responsibility. We are the custodians of their future and the future of all shorebirds, which depends on the birds successfully nesting among us, free of disturbances from drones, people, and pets. Please respect Critical Wildlife Areas, designated nesting areas, leash your pets, and leave only your footprints at the beach.

For reliable information on all birds, you can visit www.allaboutbirds.org or www.audubon.org.