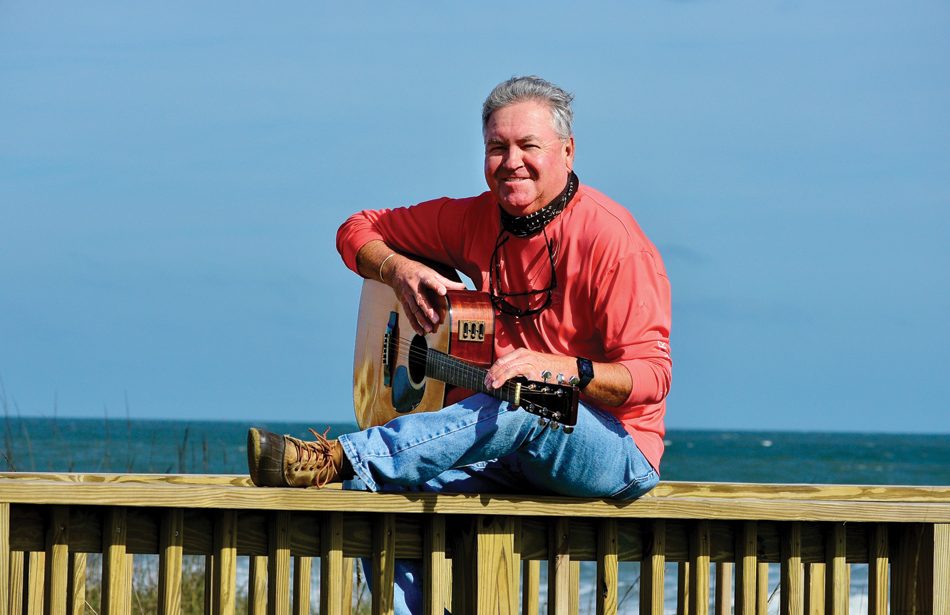 Driven by a new relationship with a son given up for adoption years ago, Amelia Island’s Sean McCarthy delivers an inspired new album called Last House on the Beach.

Things have changed quite a bit since Sean McCarthy graced the cover of the Amelia Islander Magazine 23 years ago, but McCarthy’s brand of “Coastal Country” music endures today; in fact, it just keeps getting better.

Writing his first song when he was only 12, McCarthy headed to Nashville when he was old enough to leave home, learning the craft of songwriting from some of the best in the business. He started out playing at The Bluebird Cafe and Douglas Corner Café, combining country, bluegrass, and tropical with coastal lyrical themes. He produced one album in Nashville, then another when he returned to Fernandina Beach, where he has been considered one the best performers on the island.

But that doesn’t mean there haven’t been a few bumps in the road for the talented storyteller, songwriter, artist, and boat captain. When he was a young man, his teenage girlfriend became pregnant, and her parents arranged to give the baby up for adoption, forcing the couple to end their relationship. McCarthy would go on to have three marriages, three children – Rorrey, Erin, and Cobie – and a successful music career, but something was always missing from his life.

“I have always played locally, never really playing any large venues or outside of our small town,” says McCarthy. “I hadn’t written a new song since 2011. I was of the mindset that my time had come and gone, and I had always been just that close, but missed out on any chance of my music ever reaching a broader audience. Until someone special came into my life.”
That “someone special” was his son, Jason, the baby that was given up for adoption 35-years before. “When Jason reached out to me, my heart stopped,” says McCarthy. “I couldn’t help but cry that a child I lost so long ago might find his way back into my life.”

The first night the two met, Jason asked McCarthy to play him his favorite song. “My favorite song has always been “Somewhere Over the Rainbow,” and by the time I finished, he was crying, says McCarthy. “Jason told me that his late mother’s favorite movie was The Wizard of Oz, and that it had felt to him like she was in the room looking over us and sending her blessing to this new relationship.”

Jason is a Hollywood film/television/digital media producer in Los Angeles, and he was just what McCarthy needed to get himself out of his musical funk. “I hadn’t written a song in years, and Jason challenged me to write a song for him,” says McCarthy. “I was terrified that I couldn’t do it, but within a few days I had a song for him. Then I wrote more, and more, with Jason encouraging me all the way. By the time I got to five new songs, he said, ‘Sean, how would you feel about officially formulating a band with some of your long-time musician friends and even putting together a third album?”

“With Jason’s encouragement, I reached out to some of the boys I’d played with for years and asked if they would be willing to join the Sean McCarthy Band and record some new music together,” says McCarthy. “I formed an official band with musicians Hotshot Carter, Marcus Carter, Ernie Ealum, and Daniel Daly. Within a few months, we had a website, graphics, social media pages, online music channels, booked shows, and I was able to coordinate with long-time producer and friend John Gould of Key of Sea Studios, along with Mark Deaton and Hugh Williams, to record our third album, Last House on the Beach, along with numerous singles such as ‘Sarah’s Island,’ a song about Sarah Alice Broadbent written for the new development on Crane Island, and ‘Low Country Christmas,’ our first original Christmas single.”

As things have been coming together in McCarthy’s life, he’s also starting a new marine concierge and consulting service called Hey Captain, featuring yacht sales, yacht management, consulting, and captain for hire. “So many good things are happing right now,” exclaims McCarthy. “I couldn’t have done it without the support of my family, friends, and the Amelia Island community.”