Long an anchor of Fernandina’s African-American community, Peck High School is fondly remembered by former students for its quality education and supportive relationships.

Three years ago, I decided to make Fernandina Beach my home. On the first walk around our new neighborhood, my dogs and I were drawn to an impressive red brick building on South 10th Street. It is a fine building, one that stands tall and proud in the shade of several large oaks. I knew it had a story to tell and I was not disappointed when I read the Florida Historical Marker positioned in front of the building. Intrigued by what I had learned, I hurried home to find out more.

Peck High School was a Rosenwald School, which sent me on a search to learn everything I could about the Rosenwald Foundation. The Rosenwald Foundation erected more than 5,300 schools and auxiliary buildings for black children in the South between 1912 and 1932 during the Jim Crow era. This school-building program began when Booker T. Washington, who was the principal of Tuskegee Institute, partnered with Julius Rosenwald, president of Sears, Roebuck & Company.

By requiring communities to raise matching funds, the two men inspired a grassroots movement that built schools in 15 Southern states. The schools were designed with the students in mind, for example, using natural light to protect the children’s eyesight and providing adequate space for learning. These buildings, which were the social centers of their African-American communities, were also used to set standards for white schools.

The original school building for African Americans in Fernandina, a four-room building known as Colored School No. 1, opened in 1885 with Professor Moses H. Payne, a Howard University graduate, as the first principal and teacher. Two years later, Professor William H. Peck, also a Howard graduate, became the assistant principal. Payne passed away in 1888, and Professor Peck was promoted. He developed the high school’s curriculum, and in 1891, the school graduated its first senior class.

Eighteen years later, in 1909, four acres of property on South 10th Street were purchased, and Professor Peck went to work gathering support from the community and the Rosenwald Foundation to build a larger school. He needed to raise $59,000. The Rosenwald Foundation contributed $20,000 and the remaining $39,000 was raised within the black community under the guidance of Professor Peck. Colored School No. 1 was renamed for Peck in 1911, and the new school was completed in 1927.

Professor William H. Peck died in 1950. Widely respected in Fernandina Beach and the surrounding areas, Professor Peck was recognized in the state’s Great Floridians 2000 program. Peck High School was in use for 49 years until it was closed completely in 1976 due to integration.

I wondered what life was like for the students at Peck High School, so I started collecting names and making phone calls. The first person I contacted was Cheryl Henderson, who now lives in Georgia.

Henderson was a senior the last year that Peck High School held high school classes. She graduated in 1969. “I feel very fortunate to have graduated from Peck. I’m not sure I would have finished school had I changed to Fernandina Beach High my senior year,” says Henderson. “I never felt discriminated against in our segregated community, but lower classman who integrated were not treated fairly. Students who would have graduated with honors at Peck were treated as if they weren’t as smart as the white students.”

“We were never faced with racism at Peck. It was more than a school; it was a community. We weren’t exposed to drugs, we weren’t promiscuous or anything like that, because our teachers were members of our churches. They were friends with our parents, and our parents all knew each other. We were one big family, and we were raised to be respectful,” says Henderson.

She laughingly told me that she once got a spanking for not saying “hello” to two ladies sitting on their porch when she walked by. She said the two ladies were talking to each other and she didn’t think they noticed her, “But they did, and they called my grandmother, who was waiting for me on the porch when I got home. She wanted to know why I hadn’t said ‘hello.’ Like I said, we were raised to be respectful.”

Cheryl and I talked for a while about how things have changed. “Until this past year, I didn’t realize that racism was still such an issue. I mean, I knew it existed, but I thought things had gotten better. Watching the events on the news brought back old memories. When I was young, my cousins and I would go downtown to Gene’s for cherry Cokes. There was one small table with four chairs in the back where we could sit. I never paid much attention because it was just the way it was.

“When I came back to visit in 1971 after moving to Miami to go to college, I stopped in a local drugstore and sat at the counter to order lunch. I was told that the grill was down. I later realized they didn’t want to serve me,” says Henderson.

I was able to reach three more former students of Peck. Johnnie “Lin” Robinson and Spencer Clayton who graduated in 1967, and Neil Frink, graduated in 1959. Mr. Frink is also an advisory member for the Peck Center Committee. We made plans to meet at Peck the following week. When we met in the auditorium, named after former teacher and historian Willie Mae Hardy Ashley, I was pleased that four more former students of Peck High School had joined them: Robert Blue, Class of 1965; Wanda Blue, Class of 1970; Louryne Spaulding, Class of 1965; and Alvin Williams, Class of 1969.

I only had to ask one question to get the conversation started. What did Peck High School mean to you? “Peck was more than just a school—it was family,” says Frink. “It was church for all of us. It brought everyone together.”
“We did everything here,” adds Wanda Blue. “From May Day programs, operettas, and plays, we did it all right here.”

“The auditorium was our movie theater,” Robinson says, pointing towards the vents high on the wall opposite of the stage. “There was a space up there where they played movies and had spotlights for the stage when we had plays. We had freshman sock hops, dances, graduations, and many other events in the auditorium. And the courtyard was where everything happened. I used to love standing on the balcony. I mean, who else had a balcony at their school?”

“There was no ‘high drop-out rate’ like you hear about now days. Everyone took pride in going to school and wanted to graduate from Peck,” says Clayton.

As well they should. Thanks to Principal A. Quinn Jones and his dedication to the success of both teachers and students, Peck High School became an accredited school in the 1950s. He was the principal from 1948 until 1957. The students, in spite of getting hand-me-down books and passed-down school buses from the other schools, received a first-rate education. “You were taught respect. The male teachers did not let you disrespect the women teachers or the female students. The teachers were our parents away from home,” says Robinson.

“You never heard about economic status,” says Robert Blue. “Nobody worried about how much money you had or how you lived. We were in our own little world and we were happy with it.”

“From Gum Street all the way back to Elm Street was Peck,” says Clayton. “It was the center of our community.”
“And news traveled fast. You better believe if you acted up, your mama would know about it before you got home,” Williams laughs. “And this was back before cell phones!”

They told stories about playing basketball on the outside court before the gymnasium was completed in 1956. The first court was clay, then the second was cement. Fire barrels (55 gallon drums filled with firewood) were used to keep the athletes and spectators warm during games.

“Once the gymnasium was finished, every district tournament, and just about every state tournament, was held in Fernandina because Peck had better facilities than other black schools in the area. Green Cove Springs, Pine Forest, and several other black high schools were still playing on clay courts. There were so many tournament games that we used both our outside court and the new one inside the gym,” remembers Clayton.

“People in our community opened their homes to everyone who traveled here for the tournaments because they weren’t allowed in the motels,” says Robinson. “Back then, we all took care of each other. No one went hungry or without a place to stay.”

INTEGRATION BEGINS WITH CLASS OF 1970

“Nassau County wasn’t ready to integrate; there wasn’t enough room at Southside Elementary to house all the kids, so third graders stayed at Peck until 1976. The vocational classes—Automotive, Industrial Arts, Refrigeration, and Home Economics—stayed, too,” she adds.

“Plus, the brand-new Science Suite,” Louryne remembers sadly, “but it wasn’t used after 1969.”
Johnnie Robinson, Sr. was one of the teachers that left an impact on the students. He was the first coach (football and basketball), taught Math, Art, and Social Studies, and was a mentor to the kids. “We called him the ‘X’s and O’s man,’” says Frink, “He did everything.”

“When the school was integrated, a lot of our teachers were displaced. Our P.E. teacher didn’t have a job anymore. Mr. Albert and Mrs. Owens, our Science and English teachers, ended up going to the Junior High School. Mr. Robinson was a floater for the first year before they found a place for him,” says Wanda.

In 1976, the building that was once a great source of pride for Fernandina’s African-American community was left vacant, and soon it started to show signs of neglect. “When you lose such an important part of the community, you lose more than just a building,” says Clayton. “When Peck High School was deteriorating, it felt like our neighborhood, our worth, was too. It happens in towns like this all over the country, and it’s a shame.”

Members of the community came together in the early 1980s and campaigned to save Peck High School. In 1989, the Nassau County School Board transferred ownership to the city, and the state awarded grants to restore the building. Renovations were completed in 1996, and in 2010, the Peck High School building was included in the city’s local Historic District.

Today, the building is known as the Peck Center, and it is used for different events, classes, and recreational activities. It is also home to several City of Fernandina Beach offices and non-profits. In 2019, the Peck Library was officially renamed the Ernie Tyson Albert Library. Ms. Albert, who graduated from Peck High School in 1949, is a great role model for us all. A mentor, friend, and teacher, she has dedicated thousands of volunteer hours to help the youth of Fernandina Beach.

“In 2020, the Peck Gymnasium was renamed for former coach Nelson P. Williams,” said Spaulding. “He was a phenomenal coach, but he was much more than that. He’s part of our history.”

Thanks to the dedication, determination, and hard work of the Peck Alumni Association, Peck High School received a Florida Historical Marker in 2016. It was that marker which caught my eye and started me on the path to discover more about the proud-looking building on South 10th Street and the people who called it home.

If you’d like to learn more about the history of Peck High School, visit the Amelia Museum of History and the Peck Community Center. 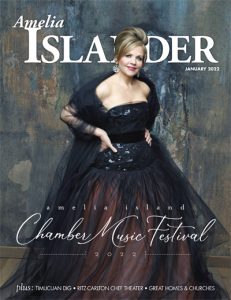