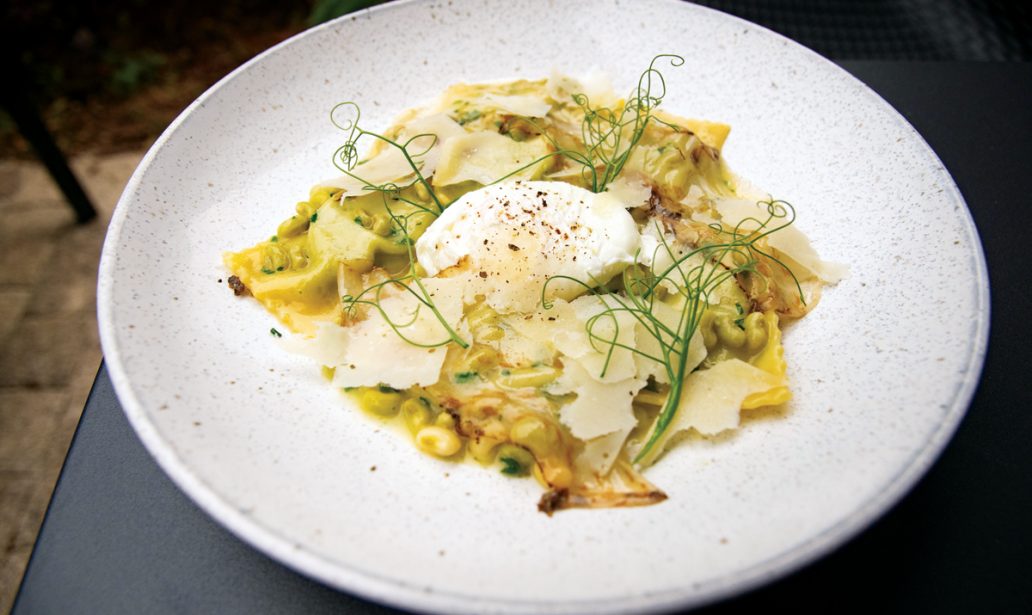 With a warm atmosphere, inventive cuisine, and the highest-quality ingredients, POGO’s Kitchen on the south end offers an exciting eating experience for lunch or dinner.

POGO’s Kitchen is one of the island’s most exciting dining establishments. Located on the south end near American Beach, the restaurant has quickly made a name for itself. Known for quality and superb ingredients, the staff at POGO’s is taking that dedication to the community every week in the form of hundreds of 5-star dinners packaged to-go for the Council on Aging.
Rather than hold back, Chef Alan Rickman and his staff are offering those in need the same kind of quality on which they have built their name. On a recent evening, I met up with my sister, Kelley Allgood, to see what was new.

We were greeted warmly at the door and escorted to our seats. While we were getting acquainted with the menu, Asa Alderson, one of my students, came out from the kitchen to say hello. Asa is in an incredible place to learn, as Chef Alan Rickman loves to pass on his knowledge. He has been featured at the James Beard House and reviewed in the New York Times.

Every meal at POGO’s begins with their signature boiled peanut hummus with grilled pita. Scented with sesame oil and topped with crushed peanuts, it is a fabulous introduction to the meal. Soon our first courses came out. Kelley selected the Seared Halloumi Cheese, a semi-hard brined cheese with a high melting point, making the halloumi perfect for grilling or searing. The dish is served with compressed watermelon and heirloom tomatoes. I selected the Carbonara Ravioli, an incredible dish of handmade ravioli filled with sweet pea puree and topped with pancetta and a sous vide egg. This dish is worth the trip all by itself. Both of these dishes paired perfectly with the Rutherford Ranch Savignon Blanc, the crisp citrus notes offering the perfect accompaniment for the nuanced flavors of the cheese and the ravioli.

As a special treat, the chef surprised us with an order of Roasted Cauliflower. One could be forgiven for imagining this as a less-than-stellar gift, but that would be a mistake. The large florets of cauliflower are coated with a Korean-style glaze and finished with lime and cilantro. Beneath the florets is a luscious puree of cauliflower that acted as a rich and creamy sauce, the whole dish shining a bright light on an underappreciated vegetable.

Our entrees arrived, and once again we were overwhelmed. I enjoyed the Szechuan Spiced Duck, seared and served with Chinese broccoli atop a crisp scallion pancake. The duck was tender and decadent, the crisp crunch of the pancake and the fresh vegetable changing up the texture. Kelley enjoyed the Seared Scallop entrée, served on house-made ramen noodles with seared pork belly and charred onion. These dishes paired perfectly with a Ken Wright Pinot Noir, not too rich for the scallop, but full bodied enough to handle the rich pork belly and the strong Szechuan flavors.

We ended our meal with a Pecan Tart topped with a bruleed meringue and served with a scoop of homemade ice cream and peanut brittle. Please save room for dessert, you will not regret it. Located at 1408 Lewis Street, POGO’s Kitchen is open for lunch and dinner through the week and brunch on Sundays. Reservations can be made on their website
at pogoskitchen.com.