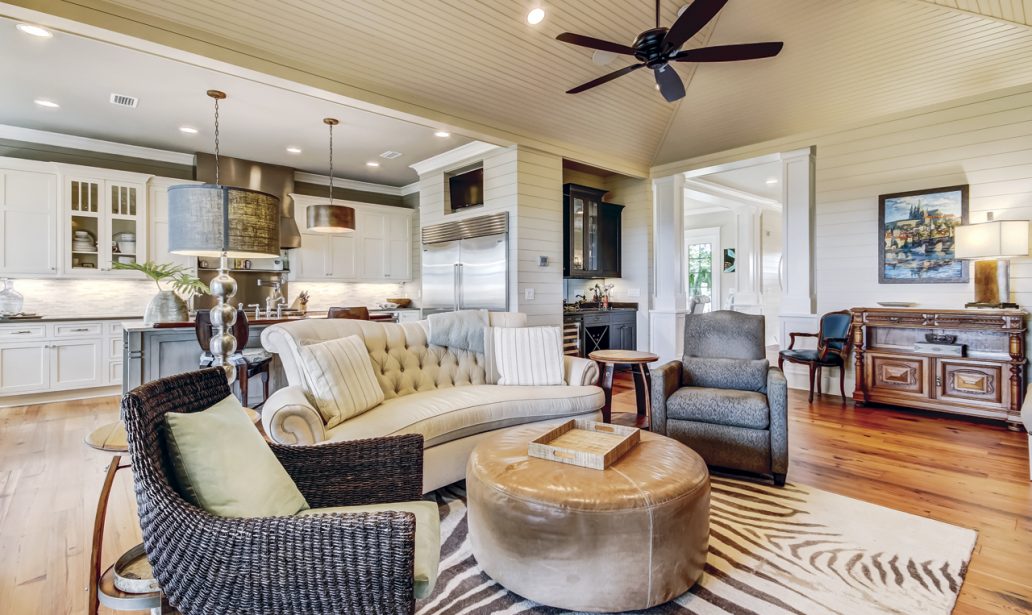 With roots in Florida, and family on Amelia, this couple moved quick to create their dream home in Oyster Bay Harbour.

In 2006, Chris and David Loucks came to Oyster Bay Harbour on a Friday night to visit David’s sister for the weekend. By Sunday, they had purchased a lot in the neighborhood. “It was that quick,” laughs David. “We were so enamored with the community, its respect for nature, the marina, and the Yacht Club. It was our dream-come-true.”

But Chris and David were not quite ready to retire yet. David, an executive with Proctor and Gamble, had to travel a lot for work, so he and Chris had lived in several places across the country, spending the last 20-years in Cincinnati before moving to Fernandina Beach. The couple was originally from Miami, and Florida was always in their blood. Not to mention that two of David’s sisters were already living at Oyster Bar Harbour. “We were destined to come to Fernandina Beach,” says Chris. “We love the location, and it’s a more laid-back lifestyle than the Miami area.”

Chris and David built their dream house around their family, with the expertise of Shawn Kirouac of The Kirouac Group. Construction began in 2012. “We wanted the house to include guest quarters for our children and grandchildren,” says David. “We wanted them to have an entire floor to themselves, with two bedrooms, a family room, two bathrooms, and a laundry room.”

Kirouac’s unique design included an entryway onto a middle landing in the house, with a half-flight of stairs leading down to the guest quarters, and another half-flight of stairs leading to the main living quarters, which includes a master suite, living room, dining room, kitchen, an outdoor lanai, and a second bedroom that serves as an office. In addition, a 4-bay garage provides room for two cars, a workshop, and room for their golf cart.

The home took about two years to build, partly because of its fortified foundation, along with the precise details put into the design. The Kirouac Group prides themselves on never building the same design twice, with the visions of their clients as the most important element of their design process.

“The carpenters and craftsmen who worked on the house were true artists,” says Chris. “The shiplap cladding was meticulously installed. We wanted a vaulted ceiling to give a more expansive feel to the house, but still have warmth with all the wood details. The wood floors are all reclaimed lumber, too,” she adds.

Chris and David hired Anne Rosenthal of Rosenthal Interiors to help with decorating. But Anne did much more than that. “Anne was in on the design from the very beginning,” says Chris. “She’d look around the space and say, ‘you need a window right here.’ She’s an amazing designer, helping us use our existing furniture, and then adding new pieces and elements that we wouldn’t have thought of.”

As much as Chris and David love their home at Oyster Bay Harbour, it is the property and the neighborhood that means the most to them. Their home reflects that, too, with its wide marsh views from several points in the home. “We love the outdoors, and we love watching the birds and other wildlife,” says David. “When the grandchildren come to visit, they want to go out in the boat. Sometimes they fish from the dock, and sometimes we’ll take a ride through the neighborhood in the golf cart. We also feel that the people who live here have a true respect for the natural world, and that makes us all feel connected.”

The Oyster Bay neighborhood reflects a luxurious, but casual low country lifestyle, with amenities that include a marina with boat slips, a Tiki Hut, a Yacht Club with a restaurant and full-service bar, 2-swimming pools, a fitness center, tennis courts, plus safe roadways for walking and cycling. Chris and David appreciate Oyster Bay’s location, too, being just a short drive to Amelia Island, with its array of beach accesses and their favorite restaurants. The couple also likes to take their grandchildren to The Nature Center, located at the south end of the island, to learn more about the flora, fauna, and rich history of the area.

“More than anything,” says Chris, “the atmosphere here at Oyster Bay is warm and friendly and has a true, small town, southern coastal charm. We couldn’t imagine living anywhere else!”