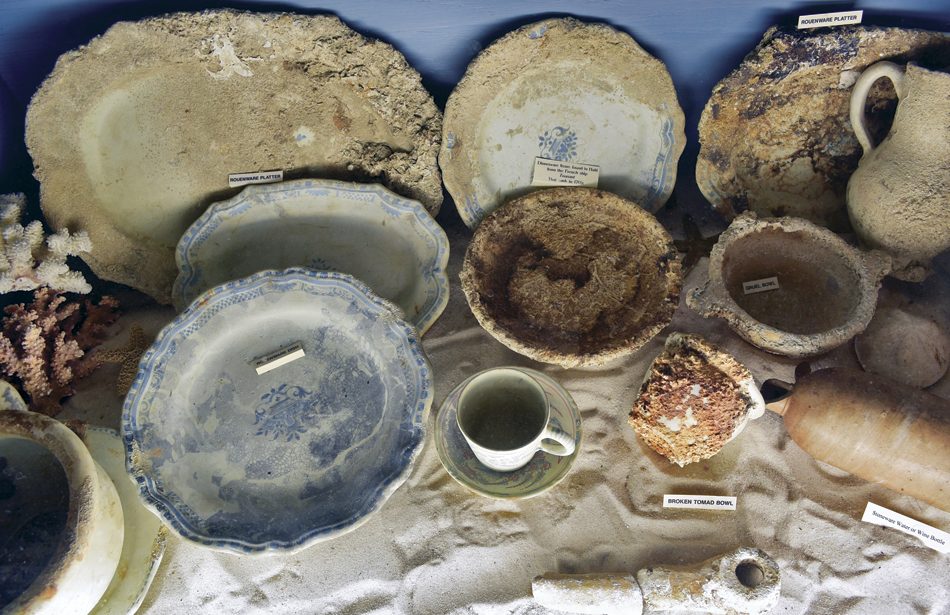 Located in downtown Fernandina Beach, the Maritime Museum of Amelia Island is a hidden treasure full of lots of interesting local history. In the 17th and 18th centuries, Amelia Island was a popular refuge for pirates and bootleggers of liquor, slaves, and stolen treasure. Fernandina’s port is one of the deepest along the southeast coast of the United States, which made it easily accessible to all ships even at low tide. At one point, it’s said that there were so many pirate galleons anchored in the harbor that you could walk from one ship to another.
Some of the famous pirates to inhabit Amelia Island include Jean LaFitte, Blackbeard, and Captain Kidd, but the most infamous pirate was Luis Aury, who tried to take over the island in 1817. When you take the pirate history of Amelia Island and add stories of Spanish treasure lost at sea right off the coast here in 1715, some of which has been found by the Maritime Museum’s Doug Pope and his crew, you can’t help but imagine what it would be like to find some of those treasures yourself.

“Every one of us is born with treasure hunter in our DNA,” says Doug, an experienced diver and treasure hunter. “We’re all hoping that we’ll find something of value during our lifetime.” And he should know. With 30 years of experience searching for and finding treasures, he has the loot and the stories to prove it.

But Doug isn’t just a treasure hunter; he’s an innovator who, together with the Amelia Research and Recovery team, designed the lift boat known as the Polly L. Doug is also a decorated helicopter pilot who served in Vietnam and Operation Desert Storm, as well as the owner and head storyteller of the museum. And he has some stories to tell.
Hanging from a chain around Doug’s neck is the very first coin his company found. He says it’s worth around $3 million. “That’s about how much money we’ve spent over the years to keep hunting treasure. You’ve seen the boat.” He’s talking about the Polly L, the Amelia Research and Recovery vessel, one of the most sophisticated treasure hunting ships on the water. With the working platform raised, she can stay on site for extended periods of time, which results in huge savings in fuel consumption–about the same amount of fuel in a 24 hour day that most conventional salvage vessels burn in an hour.

After learning a little bit about how the Polly L works at the Maritime Museum, you get to see some of the items from actual expeditions. You’ll also see pieces of copper from ships that date back to the 1700’s, pottery, utensils, cannons, U.S. Navy memorabilia, weapons from multiple eras, and too many things to mention here.
Also on display at the museum are three models constructed by volunteer Hal Mathers. My favorite is the replica of the ocean liner that Hal, his wife, and their baby daughter immigrated to America on from England in 1958. The detail is incredible. Every little piece of the flooring—every plank—was made completely by hand. It took him 10 years to complete. Everywhere you look in the museum you’ll find a story.

If you’re interested in maritime history, want to see pieces of actual shipwrecks and some of the treasures they carried, and hear stories from real life treasure hunters, then you have to stop by the museum, located downtown on South 2nd Street. And if you’d like to help share the stories, they are also looking for volunteers.

“It’s been a rough year,” says Doug. “Without the support from volunteers and from people like the Moore family, we wouldn’t be here.” The Moores own the building where the museum is located. When they learned that Doug was having a hard time making ends meet during the pandemic, they cut his rent in half.

“Come September, we’re going to start having our Friday night functions again and we have plans for another treasure hunt soon. If you want to join us, we’d love to have you.”