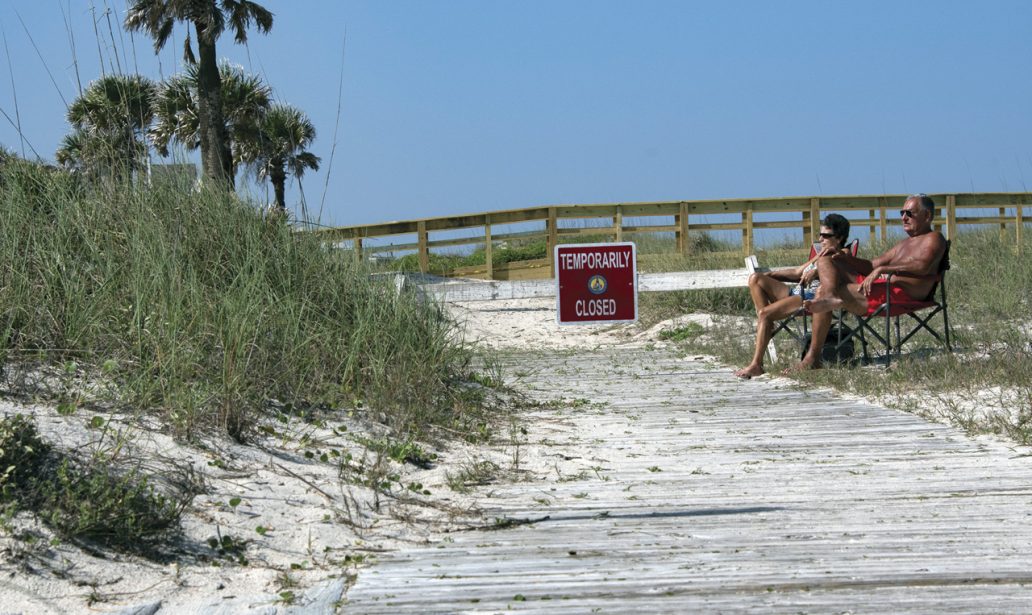 With a new community project called “2020 A Look Back,” four women create a new exhibit that catalogues Amelia Island’s extraordinary pandemic year of 2020 in photos.

In November last year, four women met at the Plantation Artists’ Guild and Gallery to talk about an idea brought to them by Karen Bowden, an exhibiting artist and board member at the popular island gallery in The Shops at the Omni Amelia Island Resort.

Karen was inspired by a project led by Kate Middleton and the National Portrait Gallery titled “Hold Still.” In this exhibit, photos were selected out of 30,000 submitted that displayed a range of emotions brought on by the pandemic. Bowden’s idea? Why couldn’t a similar project on a smaller scale be done in our community?

The four women—Karen Bowden, Barbara Hopkins, Sarah Edwards, and Dickie Anderson—agreed that, yes, it could and should be done. As they brainstormed, the project grew and soon it was dubbed, 2020 – A Look Back. Plans were made to call for photos, develop a traveling exhibit of 100 of the submitted photos, produce a video, and develop a special edition magazine.

They quickly found support in the community, starting with their first visit to Gil Langley and Marilou Welling at the Amelia Island Convention & Visitors Bureau. With their encouragement, others were approached and asked for their support and sponsorship.

A visit with Olivia Hoblit, Regional Manager of the two newest hospitality properties on Amelia Island—the Courtyard and Springhill Suites by Marriott—brought the project its title sponsor. Additional sponsors were quick to join, including Baptist Medical Center Nassau, Florida Public Utilities, and Rayonier Advanced Materials.
Foy Malloy and Scott Bryan at the Fernandina Beach News-Leader offered their support and began running ads asking for photos. Digital Village and Charlie Monroe joined the team with their technical expertise as the exhibit came together.

As the group met each week, an abundance of creative energy emerged as decisions were made. It was decided that an ideal partner and recipient of revenue generated would be Arts Alive-Nassau, a critical non-profit organization that provides arts programming to the children of Nassau County.In December, a call went out for photographs taken during the year 2020 in Nassau County by residents or visitors. Hundreds of photos were submitted. Once selected, the photos were enlarged and made ready for display, either mounted on the wall or displayed on an easel. The exhibit has been designed to be portable and will be available for display at various venues throughout the community and county. The exhibits are free.

The 2020 – A Look Back magazine, with selected photos and the story behind the project, is available for sale at exhibit events and other retail outlets. Sales of the magazine benefit Arts Alive-Nassau.

The creators are thrilled with the wide variety of photos that are included in the exhibit and the magazine. Of course, there were plenty of surprises, including expected photos that did not come in and unexpected photos that showcased what was important to people in the year 2020. The final collection of photos tells the story of a resilient and vibrant community that survived a year like no other.