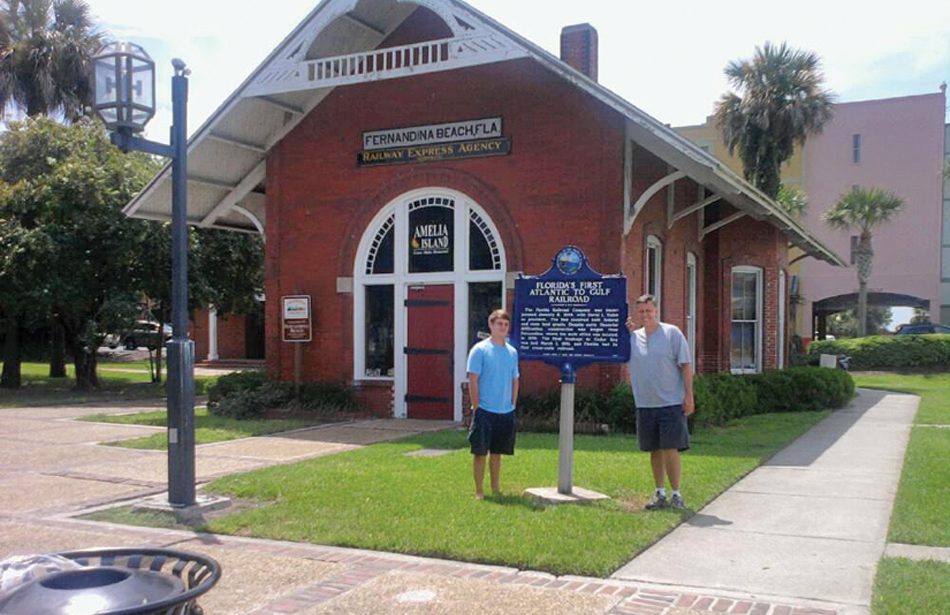 On a bike trip along the route of the Florida Railroad, a father and son made their own journey of discovery from Cedar Key on the Gulf of Mexico to Fernandina Beach.

Long before interstate highways and cruise ships, ships sailing from the Northeast to New Orleans risked shipwreck on the reefs of the Florida Keys as they made the 800-mile journey around the Florida peninsula. What if a cross-state railroad through the wild Florida interior could radically reduce that distance and the time needed? In the mid-nineteenth century, that vision became reality when the Florida Railroad was built to join Fernandina on the Atlantic Coast to Cedar Key on the Gulf of Mexico. On a long summer weekend, my youngest son and I set out to retrace the nearly forgotten tracks of the Florida Railroad by bicycle.

The dream of the Florida Railroad gained traction in 1853 by legislative charter. Its president and majority stockholder was David Levy Yulee. Fernandina and Cedar Key were thriving port cities at that time, and it made sense to connect the two through the forests and swamps of North Florida. Construction began in 1855, and soon the steam locomotive “Abner McGehee” pulled out of Fernandina station and headed westward. The journey to construct the railroad would be slow – six years – with its completion coming at the start of the Civil War.

Our own journey began at dawn in Cedar Key. We pedaled eastward through the sleepy fishing village and into miles of coastal pine forests. Soon the day turned warm, then hot. The little towns we passed through were mindful of their railway heritage. Yulee’s railroad vision did not include building railroad towns along the route, but they sprang up nonetheless. Towns like Archer, Waldo, and Callahan, and cities like Gainesville, began catering to rail passengers, and stores and hotels soon followed.

By the middle of our first afternoon, my son, Brendan, and I had reached Gainesville, nearly halfway across the state. Modern-day Gainesville, home to the University of Florida, bears no resemblance to a sleepy railroad depot. At mid-afternoon, the rains descended, and we had to hole up for a late lunch. Fifteen miles further, we came across a monument in the form of a red caboose and plaque commemorating the railroad. A few miles further on, we stopped in Starke for the night.

David Yulee was one of Florida’s original railroad barons. He was no stranger to audacity or controversy. He was America’s first Jewish senator, and he had a significant role in drafting Florida’s first constitution. And yet, when secession from the Union became inevitable, Yulee led the charge. He would later pay for this by imprisonment for treason before he was pardoned by President Ulysses Grant.

Our first day’s progress made us believe we could complete our bicycle journey by the end of the second day, but the ride turned treacherous along the shoulder of U.S. 301. Our two-day trip goal was ultimately derailed by flat tires, but we were having the time of our lives. We stopped at an old Florida gift shop to sample fudge and admire baby alligators. We filled up on food at a rest stop. On the final leg, we shared the road with timber loggers in the middle of a thunderstorm. Our second day ended an hour’s ride from Fernandina Beach.

David Levy Yulee made his home in Fernandina. When Union forces entered Fernandina Harbor, Yulee escaped via his own railroad, but he almost didn’t make it. A Union shell struck the rear of the train, killing several people.

Our final journey to Fernandina Beach was more peaceful. We crossed the bridge onto Amelia Island and headed for the marina. In Fernandina Beach, there is an awareness of Yulee’s accomplishment.
Although the Florida Railroad no longer exists, it opened the Florida frontier and the habitation of the peninsula. On a much smaller scale, my son Brendan and I felt our own sense of accomplishment. We had journeyed the same miles through the same lands as the Florida Railroad. As we dipped our tires in the Atlantic Ocean, we thought of Yulee’s vision and all that unfolded thereafter, our own journey included.