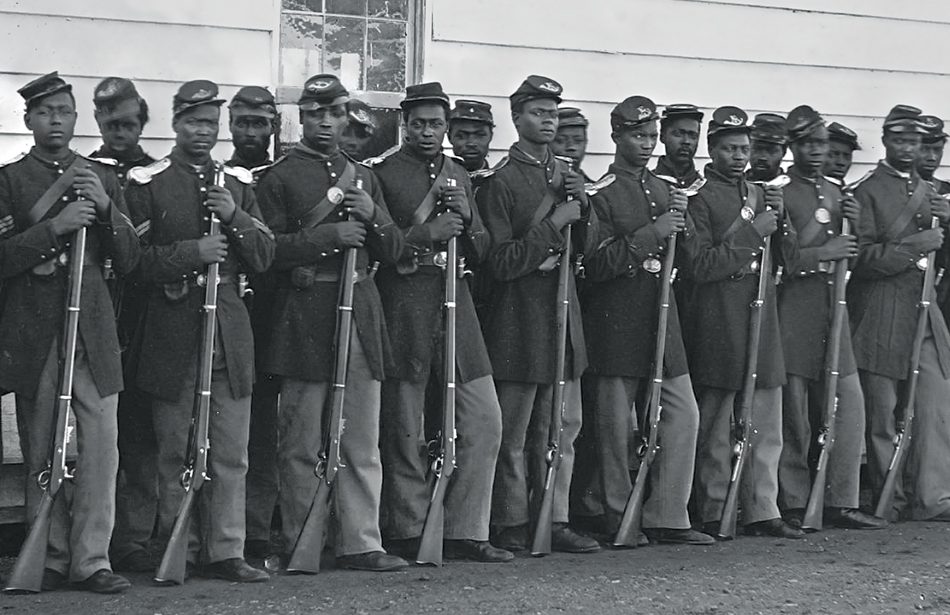 With the Militia Act of 1862, the Union Army enlisted African American freedmen and escaped slaves as soldiers and they played an important role in the American Civil War.

When the U.S. Congress passed the Confiscation Act of 1862, it freed slaves whose owners were in rebellion against the United States. In the same year, the Militia Act of 1862 empowered President Lincoln to use former slaves in any capacity in the Union Army.

“During the war, the army actively recruited men of color,” says Frank Olefdt, local historian and Fort Clinch State Park’s Park Service Specialist. “Although men of color served in the War for American Independence and the War of 1812, the organization of African American regiments for the Federal army was truly birthed during the Civil War. The United States Navy, however, had allowed free men of color to serve long before the Civil War, allowing escaped slaves to serve in the Navy. The Navy was the first branch of the military to be integrated.”

FIRST SOUTH CAROLINA VOLUNTEERS ON AMELIA ISLAND
The First South Carolina Volunteers, an assemblage of a small group of ex-slaves who were organized and trained in military skills, got their start on May 7, 1862. Under the command of Colonel Thomas Wentworth Higginson, a prominent Massachusetts abolitionist, the First South Carolina, like all black regiments during the war, were led by white officers.

The African American soldiers of the First South Carolina were the first United States Colored Troops (USCT) to serve on Amelia Island. Colonel Higginson would go on later to write a book about his experience leading the First South Carolina called Army Life in a Black Regiment. “We, their officers, did not go there to teach lessons, but to receive them,” Higginson wrote. “There were more than a hundred men in the ranks who had voluntarily met more dangers in their escape from slavery than any of my young captains had incurred in all their lives.”

Higginson, a Unitarian minister, did not countenance the powerful racial prejudices that disfigured many of his peers in that period. Later, following the war, Higginson devoted much of the rest of his life to fighting for the rights of freed people, women, and other disfranchised peoples.

The First South Carolina’s successful military operations led the way for additional African American units to be posted along the South Carolina, Georgia, and Florida coasts. As early as November 1862, black companies conducted raids against salt works and saw mills along both sides of the coastal border between Georgia and Florida. The black soldiers in the raids consisted of African American men from coastal areas in those states who had either escaped slavery by running away or by Federal occupation of their masters’ lands.

“After arriving at Fort Clinch and Fernandina by ship, many of the troops did not disembark,” says Ofeldt. “Those who did were ‘on display,’ and the conduct they observed was that of surprise and excitement from the white troops of Fort Clinch and the Port of Fernandina. For the African American population living in Fernandina at the time, it was moving for former slaves to observe this new regiment of African American soldiers; it gave them hope for the future of the African American race in America. After all, if a former slave could become an American soldier, surely a race of people could be free.”

UNITED STATES COLORED TROOPS ESTABLISHED IN 1863
The Emancipation Proclamation on January 1, 1863 allowed for further recruitment efforts of both free and formerly enslaved men of color. And just five months later, the War Department declared the African American soldiers as “United States Colored Troops.” From 1863 to 1865, the total number of enlisted African American soldiers was 186,097, making up 10 per cent of the federal army. “Of all the USCT of the Civil War, 33,380 died in service,” states Ofeldt. “And for going above and beyond the call of duty, sixteen African American soldiers were awarded the nation’s highest award: The Medal of Honor. It was a true testament to the troops’ dedication, duty, and service.”

Black troops continued to play an important role in Union operations in Florida throughout the war. In September 1864, they made up part of the force that attacked Marianna, Florida, and on March 6, 1865, black soldiers formed the mass of the Union troops that engaged the Confederates south of Tallahassee at Natural Bridge. The Union lost the battle and was denied the opportunity to capture Tallahassee during the war. A little over two months later, however, black troops marched into Florida’s capital as part of the Union occupying force that received the formal surrender of Confederate Florida on May 20, 1865.

Sadly, African American soldiers had to prove their determination throughout the war, which included their physical combat, along with their suffering from racial bigotry. Members of the United States Colored Troops were paid less than white soldiers and were restricted from serving as officers, even in their own units.

African Americans who were clergy or doctors could reach the ranks of officers, but not in combat positions. In many cases, black troops were used only for supply and guard details or manual labor. African American soldiers often faced additional dangers in the field, especially after the Confederate Congress issued a statement that any black man captured fighting against the South would be subject to immediate execution for servile insurrection, as would their white officers.

In his book, Fort Clinch, Fernandina and the Civil War, Ofeldt writes about a little-known (or not widely discussed) event that took place at Fort Clinch on December 1, 1865: the execution of six soldiers from the Third USCT just outside the west wall of the fort. “On October 29, 1865, a soldier of the Third was found guilty of stealing food from the regiment’s mess while they were in Jacksonville,” writes Ofeldt. “He was ordered to be punished by the officer of the day, Lieutenant Greybill. The punishment was to tie the soldier up by his thumbs in the parade field, where are the soldiers of the regiment could witness the punishment. A group of soldiers demanded their comrade be cut down. As they approached, Greybill drew his pistol and fired into the group, hitting Joseph Green. The soldiers retreated, took up their rifles, and returned.

“Pandemonium ensued with the exchange of shots and shouts to shoot the officers. More soldiers became involved, trying to subdue what had now become a mutiny. As mutiny is a punishable offense, 15 soldiers were charged with the violation of Article 22 of the Articles of War. The six soldiers who were to be executed were transferred to Fort Clinch for their punishment. Their names were Thomas Howard, David Craig, James Allen, Joseph Nathaniel, Joseph Green, and Jacob Plowden. The other members of the mutiny were sentenced to prison.”

UNITED STATES COLORED TROOPS AT FORT CLINCH
The United States Colored Troops fought in every major military campaign and battle the Union Army was involved in during the last two years of the Civil War. These included three of the most costly battles of the entire war: the Battle of Nashville and the Battle of Chickamauga, both in Tennessee, and the Battle of Spotsylvania Courthouse in Virginia.

“The 8th USCT infantry saw combat at the Battle of Olustee in Florida on February 20, 1864,” says Ofeldt. “There it suffered the loss of its commander, Colonel Charles Fribly, along with 310 casualties. Following the battle, the unit returned to Jacksonville and remained there with limited operations in Duval and Nassau Counties.”

The 34th USCT was the last of the African American units to serve at Fort Clinch and in Fernandina until the Spanish American War of 1898. “The African American units who served here at Fort Clinch consisted of the First South Carolina, the Third USCT, Fourth USCT, Eighth USCT, Twenty-First USCT, and the Thirty-Fourth USCT,” states Ofeldt. “In addition, the 7th, 35th, and 102nd USCT were assigned to Fernandina for an extremely short period of time and only as a detachment or company.

AN INTEGRAL ROLE IN WINNING THE CIVIL WAR
“African American soldiers played a significant role in helping bring an end to the Civil War. Both free African Americans who were already living in Northern states and former slaves from the Southern and border states answered the call to defend and preserve the Union. These men made up the regiments of the USCT, and today, we should honor and remember their sacrifices and service to our nation.”

In the fall of 1865, several months after the Civil War ended, the USCT was disbanded, as were the vast majority of troops who fought in the war. President Lincoln himself was quoted as saying, “Without the military help of the black freedmen, the war against the South could not have been won.”