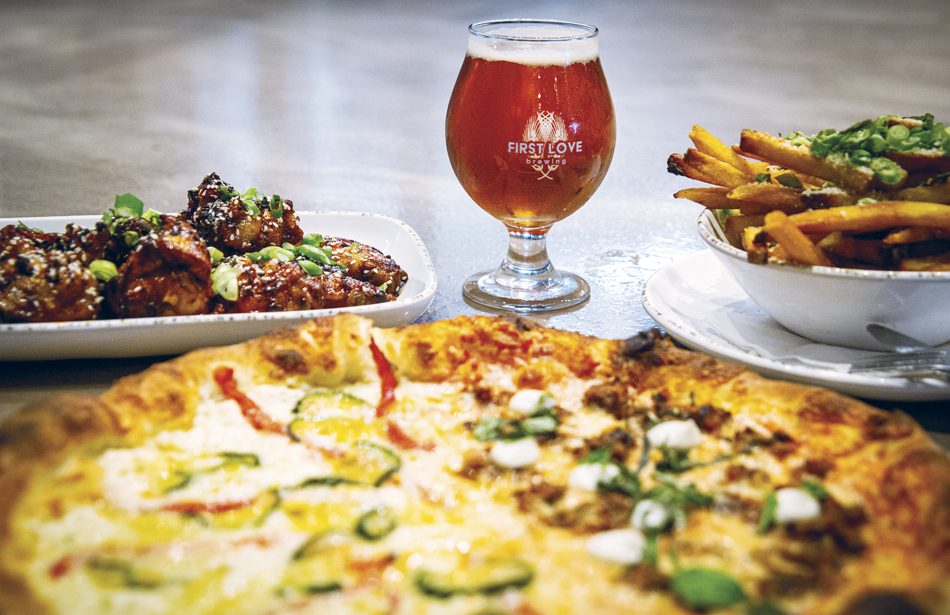 With a reputation for creative beverages and handcrafted food, First Love Brewing is building a community around its passion for excellent craft beer and artisan pizza.

The night of February’s full moon was the perfect night to enjoy First Love Brewing. My friend, Ashley Sparkman, and I could feel the passion that Jessie and Kevin bring to their work each day. High school sweethearts, they struck out on adult life together, first attending college, then mastering their crafts, and finally opening the doors here in June 2020.

On a cool evening, we grabbed a table outside under the giant oak we’d both known all our lives. As we waited in line to order, we perused the list of beers written in chalk on the wall, with name, style, ABV, International Bitterness Units (IBUs), and price. We’d arrived early on Wednesday because Kevin had said this would be a slower time, but it was already busy, with the bar already filled with patrons.
The dining area inside is not fancy. Tables, chairs, walls, and floors are clean and simple. A couple of televisions are on the wall, but the sound was off; connection and community are the design concepts these young people have planned. Flights were how we would sample as much of their beer offerings as possible. Like a flight of stairs, a flight of beer is an array of small tastes, arranged lightest to least light.

In craft brew world, brewpubs score big points for creativity of their brew paddle. Many points for First Love, for their brew paddle is Amelia Island-shaped! Four selections of beers are poured into five-ounce glasses arranged north to south. On the reverse side of a coaster are names of what we’d ordered so we could keep track of our favorites.

Foods to accompany these beers include fries, wings, pizzas, salad, and a couple of sandwiches. Double-Fried Truffle Fries were as crispy as any fries we’ve ever had and stayed that way as we sampled our beers. The light, spicy Gochujang Wings are Korean-style, whereas the sweet, robust Huli Huli are Hawaiian. The Momma Marie pizza is a grandmother legacy with meatball and ricotta flavors; the artichoke stands out in the Garden Party Pizza. Kevin teaches classes on pizza-making, and they are so in-demand that they have waiting lists.

Two young people picked Amelia Island to fulfill their dream, planned carefully, and have steadily built the tap room’s reputation, and a community around it, making it a popular place for regulars and visitors to the island. Through the evening, we’d see a toddler playing under a table, a dog sitting on the porch with its people, and adults aged 21 to 91 streaming in for refreshment. First Love Brewing is located at 22 South 8th Street in downtown Fernandina Beach.