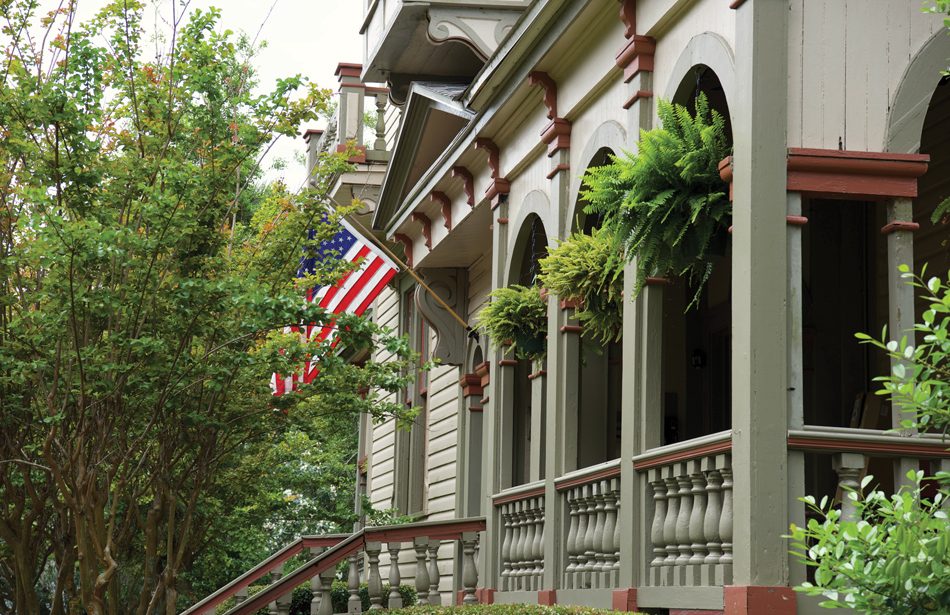 With stunning Victorian homes and majestic churches scattered throughout the Historic District, Fernandina Beach’s architectural treasures remind us of the island’s Golden Age.

In the late 1800s following after the Civil War, Amelia Island was a bustling center of commerce. Its deepwater port and the emerging development of railroads in Florida created great opportunities for the entrepreneurs attracted to the island. Many homes, businesses, and churches built during those years still stand today to remind us of those glory years.

Why does Amelia Island have so many Victorian-era houses and churches in such good shape? The island shares an interesting history with Galveston, Texas and Mystic, Connecticut. Each has homes and buildings preserved in their original shape. Why were these communities frozen in time? There is a logical explanation. If a town or city suffers dramatic economic losses, all progress, growth, and change stop. Typically, towns evolve. Old buildings are torn down, and new ones are built. In the case of Galveston, Mystic, and Fernandina, everything stopped, and nothing changed hands or was altered.
Galveston was a thriving port. When the port was moved because of hurricane threats, the town went to sleep. Mystic was a thriving port, where fleets of whaling ships were based. With the arrival of electricity and no need for whale oil to fill lamps, the port became quiet.

The dramatic shift of Amelia Island’s economy was largely due to Henry Flagler’s railroad expanding down the east coast of Florida, taking commerce and tourism away from Fernandina. The once-thriving Egmont Hotel, which welcomed guests from the Northeast, shut down. No use was found for the elegant building, and it was broken up into salvage. The so-called Three Sisters, a row of houses on South 7th Street, were built of salvage from the hotel.

With no growth in the economy of Fernandina, there was little movement or change. The elegant homes of North 6th Street and South 7th Street remained unchanged and are there for us to enjoy today—a living museum.

PRESERVING FERNANDINA’S ARCHITECTURAL TREASURES
Historic preservation has been a priority for Amelia Island and the town of Fernandina Beach since 1973, when the downtown Historic District was included in the National Register of Historic Places. The original designation included 1,500 acres of land. An additional 970 acres were added in 1987. Four hundred buildings are included in the district.

As often happens, the teardown of a historic building created a sense of urgency to act in order to prevent future losses. Many tie the commitment to historic preservation to the loss of The Keystone Hotel. Built in 1912, it was the center of social activity in its heyday. However, it outgrew its usefulness and sat sad and empty on Centre Street. When the hotel was abruptly torn down overnight in 1972, a shocked community recognized the need to take action and protect its historic properties.

It is important to understand that recognition by the National Register of Historic Places does not protect the buildings. It functions solely as a listing of historic sites, districts, buildings, and landscapes. It is up to local government to protect buildings or sites from demolition or alteration. After the loss of the Keystone Hotel, concerned groups formed and the City of Fernandina Beach prioritized the protection of its historic buildings. The Historic District Council (HDC) was formed, comprised of five regular members and two alternate members, all appointed by the Fernandina Beach City Commission.

The carefully preserved houses, buildings, and churches built during the so-called Golden Age were built in the late 1800s and early 1900s by the entrepreneurs and leaders in the community. Foremost among the leaders, David Yulee, was president and chief stockholder of the Florida Railroad Company, which ran 156 miles from Fernandina to Cedar Key on the Gulf of Mexico. He was a major employer.

Yulee moved the original town of Fernandina from a bluff north of present-day Fernandina Beach, leaving behind “Old Town” and creating Fernandina Beach, or “New Town,” at its current location. He platted the new town to mimic Manhattan in New York City. Fernandina even has a Central Park just east of the historic downtown. Part of his relocation plans included offering prime locations to churches for their new sanctuaries at favorable terms.

THE FAIRBANKS HOUSE AND THE BAILEY HOUSE
Victorian-era buildings are recognizable for their elaborate detailing. Many houses in Amelia Island’s Historic District showcase a wide variety of window styles, fretwork, shaped shingles, brickwork, galleried porches, and a variety of paint colors. The more detail used, the more impressive the house would be considered. The majority of the houses in the Historic District were not designed by architects and are considered vernacular, an architecture style concerned with function and comfort rather than grandeur.

So who built these amazing houses? They were the leaders of the community, the movers and shakers of the day. George Fairbanks was a fruit grower, a historian, a lawyer, an editor of the Florida Mirror (now the Fernandina Beach News-Leader), and senator. Fairbanks hired architect Roberts Sands Schuyler, who designed St. Peter Episcopal Church and other buildings in the Historic District. The Fairbanks House is Italianate in design, one of the many variations popular during the Victorian Era. Details include an unusual oriole window, balustrade porches, dormers, bay windows, and its distinctive tower. The house, considered extravagant in its day, was nicknamed Fairbanks Folly. It is now a popular bed-and-breakfast inn.

Considered one of the finest examples of Queen Anne architecture, the Bailey House sits on the corner of Ash and 7th Street. Built in 1885, the house offers examples of typical Victorian-era house detail. It has three-story turreted bays at the two corners of its front facade, and wide-eaved porches on its south and east sides. Fish-scale shingles cover its gables. Effingham W. Bailey was an agent for a Fernandina Beach shipping company and enjoyed a successful career with the railroad, built the trolley that ran from town to the beach and the Keystone Hotel.

The Bailey House is a so-called bride’s house. At the time of its building, a gentleman was expected to provide a home for his new bride. George W. Barber of Knoxville, Tennessee designed the Bailey House. It is built of native heart pine and includes six fireplaces and Tiffany-style stained-glass windows. Local boat builders and ships carpenters probably were engaged to perform the exacting tasks of cabinetry, molding, and the carved railings and pillars.

THE TABBY HOUSE
One of the more interesting houses in the Historic District is the so-called Tabby House, located at the corner of Ash and 7th Street. Most of the historic homes are named after their original owners, but in the case of the Tabby House, it is named for its unique construction material – tabby. Built during the Golden Age, the house offers a sharp contrast to the more typical Victorian houses in its neighborhood. It was unusual to use this construction technique at the time it was built. Robert Sands Schuyler, the same architect that designed many other buildings in Fernandina, was the designer. It is the only existing tabby house on the island.

The method of construction is simple. A mixture of Portland cement and oyster shells is poured into molds to create the walls of a house. Tabby is dependent on an abundance of oyster shells. Thanks to the Indian tribes that occupied the coast of Florida, many middens of oyster shells were left for later generations to use in the fabrication of tabby houses.

The detailed trim on the galleries is typical of the intricate detail that characterized Schuyler’s buildings. Similar detailing can be seen in the Williams House, Fairbanks House, and St. Peter’s Episcopal Church. The house has had many lives. At one time, it operated as a funeral home; later it was abandoned, suffered a fire, and barely survived. It remains as one of the Historic District’s more unusual and important homes.

FERNANDINA BEACH’S HISTORIC HOUSES OF WORSHIP
Amelia Island has always valued its houses of worship. Throughout the island’s history, churches have been established and organized that reflect the needs and interests of the people. Like most of the buildings in the Historic District, community churches were not designed by architects but were the result of the efforts, available resources, and talents of congregation members.
When David Yulee convinced the residents of the original Fernandina, or Old Town as it is known today, to move to its current location, the railroad offered a very low price to “each body of Christians desiring a place to worship.” Many took advantage of the offer and occupy prime real estate in the Historic District.

Located at Centre and Seventh streets, St. Peter’s Episcopal Church was built in 1881 and is considered architect Robert Sands Schuyler’s masterpiece. Originally from New York, Schuyler was deeply religious. He built many churches throughout Florida in the Gothic or Carpenter Gothic style. Architectural detail includes nearly perfect proportions, arched windows, a steeply pitched red roof, buttressed walls, and its distinctive tower with a castellated parapet. The church’s stain glass windows are memorials to people who are part of the church’s rich history. The church is open to the public. A cemetery adjacent to the church is the graveyard of many leaders of the community.

A more modest church, Trinity Methodist, sits several blocks away at Ash and Eighth streets. The small, boxy church has many details that reveal the congregation’s commitment to build a beautiful house of worship. The two-story masonry building is noteworthy for its lancet arched windows with belfry and square tower. Beautiful etched stained-glass windows line the walls and glow on a sunny day.

In 1996, the church’s congregation had dwindled, and the historic church fell into disrepair. Leaders in the community stepped up and formed Friends of Trinity. In 2016, when Hurricane Mathew damaged the roof of the church, once again the community rallied, and a successful fundraising campaign funded the roof replacement and made other improvements to the historic church.

With its lovely Victorian-era homes and historic churches, Fernandina Beach is a historian’s dream. In addition, you’ll find plenty of locally owned shops and restaurants on Centre Street and throughout the Historic District. And don’t miss the Amelia Island Museum of History for its informative exhibits and docent-led tours.