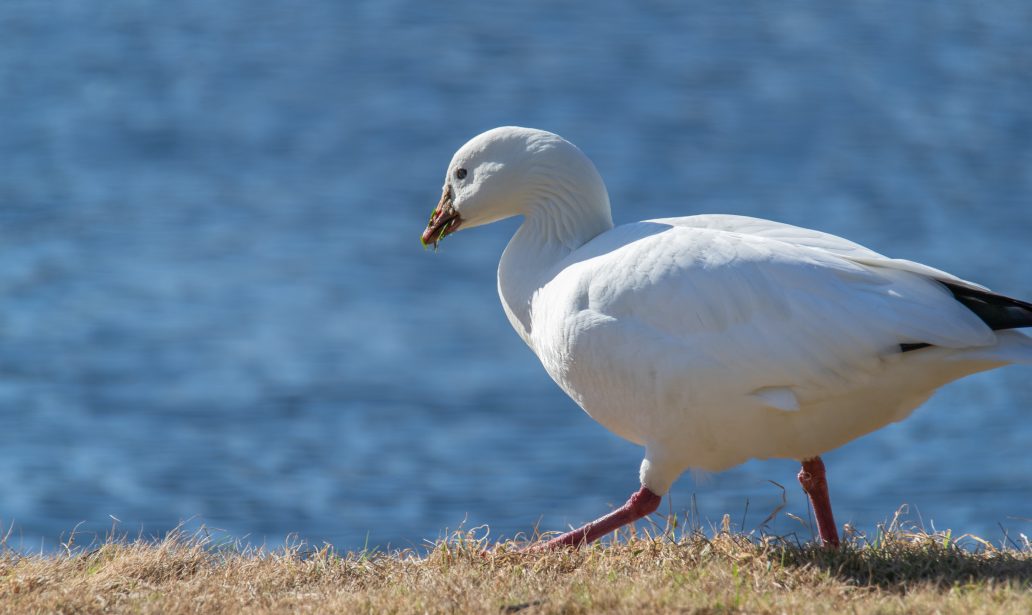 Local golfer, Ron Pfeffer, has seen some beautiful things during the many years he has played golf.  Little did he realize when he set out one beautiful December morning that he would soon see something he had never seen before: anywhere!

It is common to see Canada Geese on golf courses.  It is far, far less common to see a white goose interacting with those geese.  So, Ron did a double take when he saw a beautiful, white goose that morning as he was golfing.  Ron Pfeffer is an experienced birder and naturalist.  Most birders, including Ron, would think they were looking at a Snow Goose.  Snow Geese are seen in the surrounding area from time-to-time.

However, after reviewing his photos, Ron received some valuable input from a birding contact on the Chesapeake Bay.  He also consulted with a knowledgeable birder and e-Bird reviewer from Jacksonville named David Foster.

It turns out Ron had found something far rarer for our area than a Snow Goose.  He found a Ross’s Goose.  Early research and reports indicate that this is likely a record for Nassau County, FL.  The goose continues to stay at the Golf Club of Amelia Island, enjoying relaxing days and sharing meals with the other geese there.

This beautiful Ross’s Goose has flown thousands of miles from the northern reaches of Canada to spend the winter here. Ross’s Geese often spend the winter on the Chesapeake Bay but are much more likely to winter in Texas, Louisiana or Oklahoma.  They rarely visit Florida. Chances are this goose was blown off course during migration.  A Ross’s Goose is smaller than a Snow Goose or Canada Goose.  Cornell Lab of Ornithology states that they have a wingspan of approximately 45” and only weigh about 3 or 4 pounds.  They spend most of their day grazing and roost at night with other geese.

This Ross’s Goose is another good reason to keep your “eyes to the skies” for this and other treasures our area has to offer.