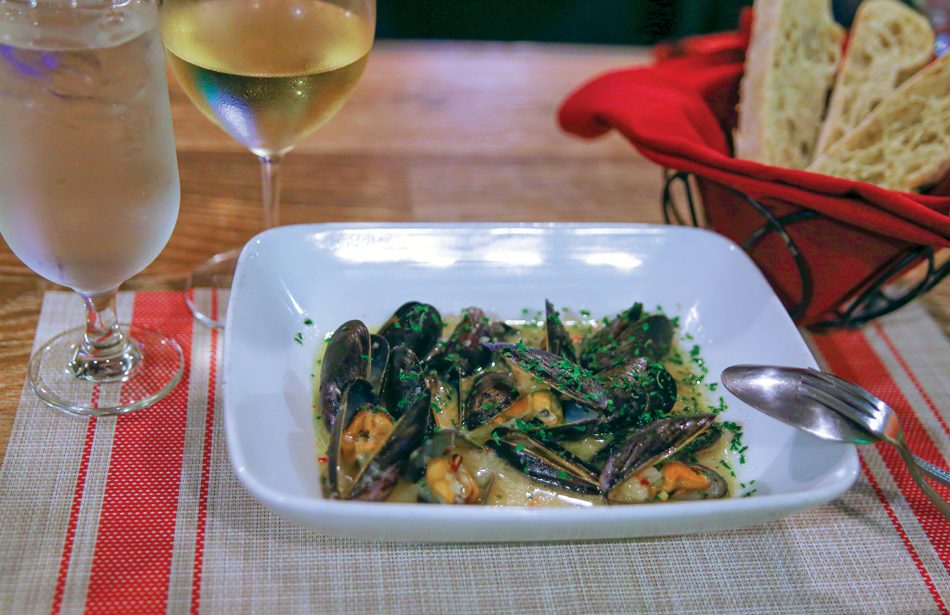 In Italy, cucina means the kitchen, as well as the cooking style that emerges from the kitchen. On Amelia Island, Cucina South is the Italian restaurant on the south end that prepares this cooking style. And what style it is! Having its own coterie of regulars, I suggest you book your table a week or two in advance. Your reservation will get you a seat upstairs, downstairs, or on the porch, the latter being the most sought-after seats, so ask for these early.

One particular Saturday, my husband and I sat upstairs in what felt like our own little dining room – a rustic piccola cucina awash in sundrenched colors. On the walls were paintings that transported us to the Mediterranean. Italian beer would ground us in this cucina moment. Our server Eve brought bread and advised on beer. For me, she recommended Cyclope Bianca, a Sicilian craft wheat beer, citrusy and golden, with notes of flowers and spices. Just perfect! Without her help, I would’ve missed this beautiful beer.

In typical Italian style, focaccia and oil came quickly to the table. Focaccia bakers ourselves, we didn’t expect anything special, but this was the thinnest, airiest, crunchiest focaccia we’d ever seen! Puzzling how they got such big holes into a crunchy flat bread that drank in the delicate house-infused garlic olive oil.

Fresh focaccia was also featured in the panzanella. A Tuscan bread salad with tomato, onion, and other vegetables, panzanella was borne of a need to upcycle fresh daily bread and bountiful tomato crops. At Cucina South, Panzanella, Spinach, and Caesar Salads all come in mezzo porzione, or half portions. In addition to bruschetta, a variety of soups and pastas are available for those who like to fashion their own favorites.

Brussels sprouts are the new bacon, I’ve heard it said, but Cucina South doesn’t think you should have to choose. My black plate was art with Bacon and Brussel Sprout Risotto alongside my Pan-Seared Scallops, served on Sun-Dried Tomato Puree. The P.E.I Mussels and Littleneck Clams had Ken considering cioppino, but he was craving a little carne. Eve suggested the Osso Buco. Meaning “hole in the bone” to describe the flavor imparted by the marrow, his Osso Buco popped with Wild Mushroom and Arugula over Creamy Polenta.

Troppo abbondante? No, not too much, but almost. Clearing our palates with a small muscato di asti, we rested and reflected on our dinner. How I love a place where people are dressed way up and down, where groups are both large and small, and where children are out with their families are welcome.
Desserts were listed on a card Eve gave us. Chocolate-lovers, rejoice, with a choice of Mousse, Flourless Cake, Cannoli, and Tiramisu. Fruity finishes include Blueberry Cheesecake and Limoncello-Mascarpone Cake. We picked the latter, and another which was unspeakably grand: Toasted Almond Cream Cake is amaretto-soaked sponge cake with biscotti crumbs and toasted almonds. Its flavor and texture that left us talking about it for days.

From our first sip of Italian beer to the last bite of cake, we felt suspended in la dolce vita at Cucina South. Cucina South serves dinner at 5:30 p.m. Tuesday to Sunday at 4828 First Coast Highway in the Palmetto Walk Shopping Village.