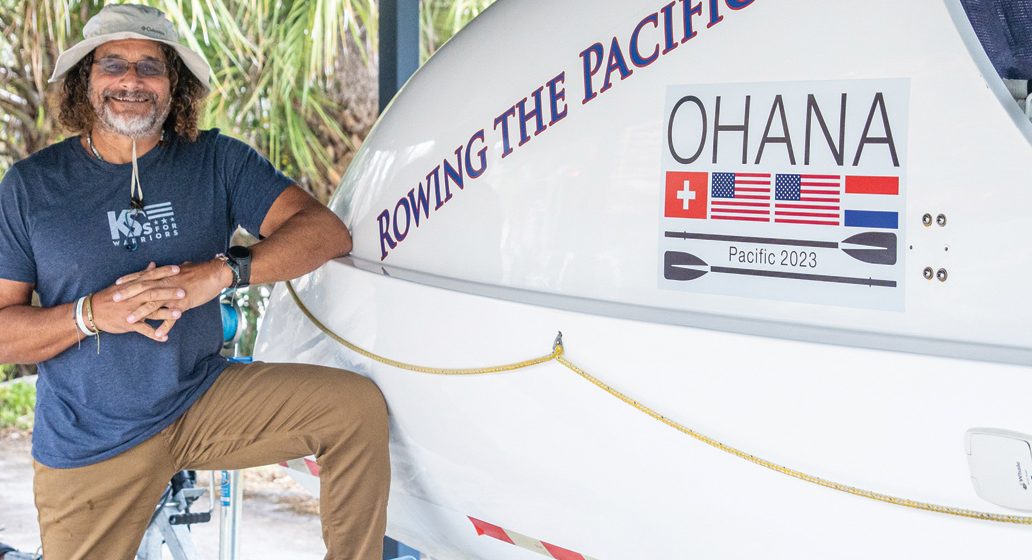 After completing the Talisker Whisky Atlantic Challenge and raising money for K9s For Warriors, Paul Lore and a new team will be rowing across the Pacific Ocean in June.

In February, Paul Lore, Billy Cimino, Cameron Hansen, and A.M. ‘Hupp’ Huppmann competed in the the Talisker Whisky Atlantic Challenge, a 3,000-mile row across the Atlantic Ocean from the Canary Islands to the Caribbean. Thanks to their unwavering commitment and support from community, friends, and family, Foar From Home surpassed their initial goal of $500,000, which was raised to fight PTSD and suicide among American veterans.

The majority of the money raised went to K9s For Warriors. If you’re not aware of K9s For Warriors, the group rescues dogs to rescue veterans by providing highly trained service dogs to military veterans suffering from PTSD, traumatic brain injury, and/or military sexual trauma. K9s For Warriors is the nation’s largest shelter to service program, which means the majority of dogs they train come from high-kill rescue shelters.

Each $25,000 that Foar from Home donated was used to sponsor a dog in this life-saving program. They also funded the construction of Courageous, the new mega-kennel for K9s For Warriors in northeast Florida. Foar from Home also donated funds to the Cross the Line Foundation to start a vocational or college endowment to assist veterans and their families during job, career, or life transitions, and they used their platform to bring awareness to the work and mission of The Fire Watch, Florida’s fight to end veteran suicide.

No sooner had Lore, who is a surprising sixty-years young, readjusted to being on land than he decided to it again! In June next year, Lore will be competing in the Talisker Whisky Pacific Challenge to continue to raise money for K9s For Warriors. Team Ohana, which includes Lore, Iris Noordzij from the Netherlands, Mat Steinlin from St. Augustine, Florida, and Marina Hunziker from Switzerland, will cross 2,800 miles of the Pacific Ocean, starting in Monterey Bay, California and finishing in Kauai, Hawaii.

Lore met his teammates in Amsterdam for a week of training that included team-building exercises and boat drills, but the actual physical training is just a fraction of the work Lore will put in before and after the challenge. Even though he knows how much work goes into the fundraising side of the event, he jumped into the challenge with both feet.

That’s the kind of friend Lore is. He is proof that life doesn’t have to be perfect to be beautiful. Fun fact: when Paul described his life in six words, his quote,“I live the perfect imperfect life,” was chosen and published in the New York Times-bestselling book, Not Quite What I Was Planning:
Six-Word Memoirs by Writers Famous and Obscure.

You might know Lore as the bartender at the historic Mermaid Bar. Word on the street is that he makes the best Old Fashioned and Sazerac cocktails on the island. Or by his ocean photography published through Southern Fried Pictures. Or maybe you know him as the new owner of the Thompson House. He and his wife, Ruth Maestre, purchased the historic 1872 home two years ago and have been working to restore her back to her beautiful self.

“Life is all about restoration, renovation…paying it forward,” says Lore. Which he does every day. He served eight years in the U.S. Marines as an Air Traffic Controller, and the next 30 years as a controller for the federal government. He graduated from the University of Michigan and completed a Master’s in Public Administration from the University of Oklahoma.

These days, Lore, the proud father of four grown children, is very active in the community. He serves as the Nassau County representative for the Veteran Fire Watch Program and the St. Marys River Management Committee. He serves on the Fernandina Beach Marina Advisory Board and is a Board Member of Keep Nassau Beautiful. He also started Fins & Friends for Gold Star families, veterans, and first responders. Per Lore, “All you need is a love of the ocean and each other.”

If you’d like to support Team Ohana in the Talisker Whisky Pacific Challenge, you can find the team at www.ohana2023.com.