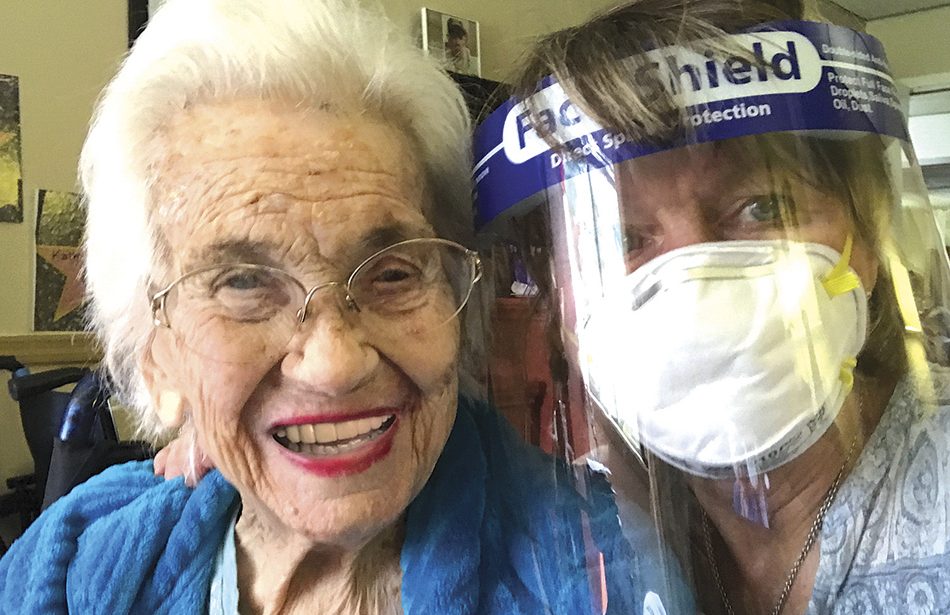 Like they did during the Yellow Fever epidemic of 1877, Fernandina Beach and Amelia Island residents faced the Covid-19 pandemic and came together in a time of crisis.

On September 15, 1877, Fernandina made news in the New York Times with the headline, “Yellow Fever in Fernandina.” The tiny article, which was less than ten lines long, stated: “Five deaths have occurred in Fernandina since the last report, and there are several new cases.” The cases would grow quickly, with 1,146 people eventually contracting the disease out of a total population of 1,632 in this small coastal community.

Yellow fever, or “Yellow Jack” as it was sometimes called, wreaked havoc throughout the country during the 18th and 19th centuries, with epidemics popping up in many states. The first major yellow fever outbreak took place in Philadelphia in 1793, crippling the capital city as 5,000 people died and 17,000 fled the area. More outbreaks occurred in places like New York, Boston, New Orleans, and Norfolk, before Yellow Jack made its way into Fernandina.

YELLOW FEVER COMES TO FERNANDINA
No one knew for sure what caused yellow fever then, but theories ranged from “bad air” to “rotting coffee beans” and other odd speculations. And seemingly whatever controls were put into place, like burning barrels of tar in the streets or using aggressive medical treatments like administrating mercury or bleeding patients who were sick with the disease, more and more people died.

Yellow fever got its name from the jaundice that appeared in patients as their livers were compromised by the disease. The illness begins like a case of the flu, with fever, body aches, nausea, and lack of appetite. In many cases, a patient with yellow fever would seem like they were getting better, then in another two days their condition would worsen with bleeding, kidney problems, and liver failure. As Yellow Jack spread throughout the country and the world, it was considered one of the most dangerous infectious diseases.

Shortly before Yellow Jack came to Fernandina, a group of Jacksonville physicians formed a group called the Duval County Medical Society, the first of its kind in Florida. The president of the Society at that time was Dr. Francis Wellford, who would come to Fernandina to assist with the yellow fever outbreak, along with his colleague, Dr. James Herndon. Just two weeks after the initial outbreak, the extent of the disease was such that local officials could no longer cope they and reached out to other communities for assistance.

Other doctors arrived to help, seeing dozens of patients each day. The Sisters of St. Joseph, a group of Catholic nuns who were teaching at St. Michael School and living in what is now called the Phelan-Verot house, sprang into action, nursing the sick and dying around the clock, and even helping to bury the dead. Quarantines were put in place, but nothing seemed to keep the disease from spreading.

FIGHTING AN INVISIBLE ENEMY
“Nobody knew where yellow fever came from,” says local historian Frank Ofeldt. “Field cannons were set up around the city and shot frequently to disperse the air. Fires burned throughout the town in order to destroy the yellow fever germs.” Ultimately, 94 people died of the disease, including two of the Sisters of St. Joseph, along with Dr. Wellford and Dr. Herndon.

Yellow Jack made its way around the country and the globe before Major Walter Reed, a U.S. Army pathologist and bacteriologist, led experiments that would prove in 1900 that yellow fever was transmitted by the bite of a mosquito. The culprit turned out to be the Asian tiger mosquito, which showed up in ships from other parts of the world. What makes these mosquitos unique is they breed in small amounts of standing water, in vessels like watering cans and buckets. So while soldiers from Fort Clinch were blasting cannons around Fernandina, mosquitos were quietly killing its residents, one bite at a time.

In 1888, eleven years after the Fernandina outbreak, yellow fever raged throughout the entire state of Florida. Alachua County placed guards at all rail and road entrances to the county, and an officer at the county line had authority to put off the train anyone without a health card or certificate. Nevertheless, Yellow Jack spread, reaching Jacksonville in July, then hitting Fernandina again in August.

In Fernandina, officials denied yellow fever was present, then called for state help when commerce stopped and looting began. Gainesville Guards were ordered to the stricken city. The guards, singing “We’ll Hang the Yellow Jack to a Sour Apple Tree,” boarded the Seaboard train for Waldo and Fernandina. The epidemic continued on and off throughout the country until Walter Reed’s discovery of the cause of the disease.

Today, a stained-glass window called “The Doctors Window” can be found at St. Peter’s Episcopal Church on Atlantic Avenue, paying homage to Drs. Wellford and Herndon. The inscription reads: To Whose Memory as a Grateful Record of Their Noble Lives and Historic Death, This Window is Dedicated. The brave nuns who cared for the sick and dying yellow fever victims are buried at Bosque Bello cemetery, where Fernandina residents named them “The Angels of Mercy.”

ONCE MORE INTO THE BREACH
In 2020, 143 years after the yellow fever epidemic, no one was prepared for a global pandemic to make its way again into the small community of Fernandina Beach, but Covid-19 slipped into Nassau County with a vengeance, causing 127 deaths. On March 11, 2020, Fernandina Beach made news when the first known positive case of Covid-19 was reported.

The 68-year-old man had reportedly contracted the virus while traveling out of state and had no idea he had been infected. When he realized that he had the virus, he went into self-isolation and the Florida Department of Health/Nassau County started monitoring him and researching people whom he may have come into contact with so they could be tested for the virus.

The World Health Organization had just declared the new coronavirus to be a pandemic and Amelia Islanders listened to reports that twenty new cases had been confirmed in New York City overnight, but it seemed unimaginable that the city of Fernandina Beach was in any danger. Even though the governor of Florida had declared a state of emergency on March 1, many residents felt they were safe.

The Nassau County Board of County Commissioners held a meeting late on the afternoon of March 11, 2020 to address community concerns about the spread of Covid-19 and to reassure everyone that proper steps were in place to contain the virus. But many residents were concerned. The Amelia Island Concours d’Elegance, an event that attracts approximately 50,000 people onto Amelia Island on the first weekend of March each year, had just taken place the weekend before. The event organizers had added additional hand sanitizer stations at all entrances, food courts, and other areas. They also urged anyone with flu-like symptoms to stay home. But was that enough?
Amelia Island Soapery could attest that residents were following hand-washing procedures as they quickly sold out of product. They couldn’t keep up with supply and demand as orders for antibacterial soap were coming in from out of state. And soon, larger stores were quickly running out of products, too.

COMING TOGETHER IN 2020 AS CASES SURGE
As cases rose in Florida, the governor shut down bars and restaurants. City officials closed Fernandina’s beaches, along with other outdoor recreational facilities. On March 31, twenty days after the first recorded case, the Nassau County Emergency Management reported the total positive case count to be nine for Nassau County. Five of those cases were from Fernandina Beach.

In the middle of all the uncertainty, however, residents and business owners came together. The manager of Fernandina’s Winn-Dixie offered restaurant workers temporary full-time jobs until restaurants and bars could open again. People in the community bought gift cards, purchased items online, and took advantage of curbside delivery from local businesses.

When masks couldn’t be found on store shelves, residents came together and sewed them by the dozens, then by the hundreds. People looked out for each other while they waited for the virus to be contained and for life go back to normal. Unfortunately, it was just getting started.

As numbers continued to rise, Amelia Islanders went into lockdown. Parents adjusted as best they could and worked from home, kids adjusted and found new ways to keep themselves busy. Families came together. Residents did things to keep their neighbors in good spirits by writing letters, posting uplifting messages on social media, calling friends who lived alone, and delivering baked goods to front porches. The Barnabas Center and other local charities continued to supply food and financial assistance to those who needed it the most.

In early May, with more testing made available and people anxious to get back to normal, state parks reopened. Social distancing, handwashing, and masks were still encouraged. In July the Nassau County School Board unanimously approved a return to school plan for August 23 with the option of either in-person or distance learning.
On August 21, youth sports organizations asked Fernandina Beach City Commissioners to open up city ball fields to team sports and competitions despite concerns caused by the Covid-19 pandemic. While sympathetic, the FBCC decided to withhold final decision until at least August 24. Lots of people thought they were being overly cautious, but the FBCC wanted to make sure that every safety measure was in order and in place.

FINDING NEW WAYS TO LEND A HAND
It seemed like things were looking up, but on August 28, 2020, The Florida Department of Health reported a significant number of Covid-19 cases at a Fernandina Beach nursing home. 47 residents and seven staff members had tested positive for the virus. Nonetheless, Fernandina Beach residents continued to come up with clever, new ways to care for one another and keep their friends and families safe.

As the community watched 2021 roll in, they waited patiently for their opportunities to get vaccinated. Residents had become weary of wearing masks, and everyone yearned to go back to a “normal” life. Unfortunately, “normal” had now become the “new normal,” and Amelia Islanders continued to adjust and support one another.
Florida’s governor lifted Covid-19 restrictions in May this year, but Fernandina Beach residents and businesses continued to use caution while gathering in close-knit situations. Many folks had decided that not only did mask-wearing keep them safe from Covid-19, but also from other viruses. Many older Amelia Islanders today will tell you that they’ll continue to wear masks and order groceries online in order to stay healthy.

Like the yellow fever epidemic, the Spanish flu epidemic, and many other pandemics throughout the centuries, Covid-19 will continue to rear its ugly head with resurgences and variants of the disease. But Amelia Islanders have come together in crisis before, and they will continue care for one another as they have in years past.

In December last year, the Plantation Artists Guild & Gallery sent out a call for photographs of Nassau County by residents or visitors for a special exhibition called “2020 – A Look Back.” Once selected, the photos were enlarged and made ready for public display. The exhibit has been designed to be portable and is available for display at various venues throughout the community and county. A magazine with photos and the story behind the Look Back project is available for sale. The final collection of photos tells the story of a resilient and vibrant community that survived a year like no other. For more information about the show, visit www.paggart.com.

For updates on the current Covid-19 conditions in Nassau County visit nassau.floridahealth.gov.