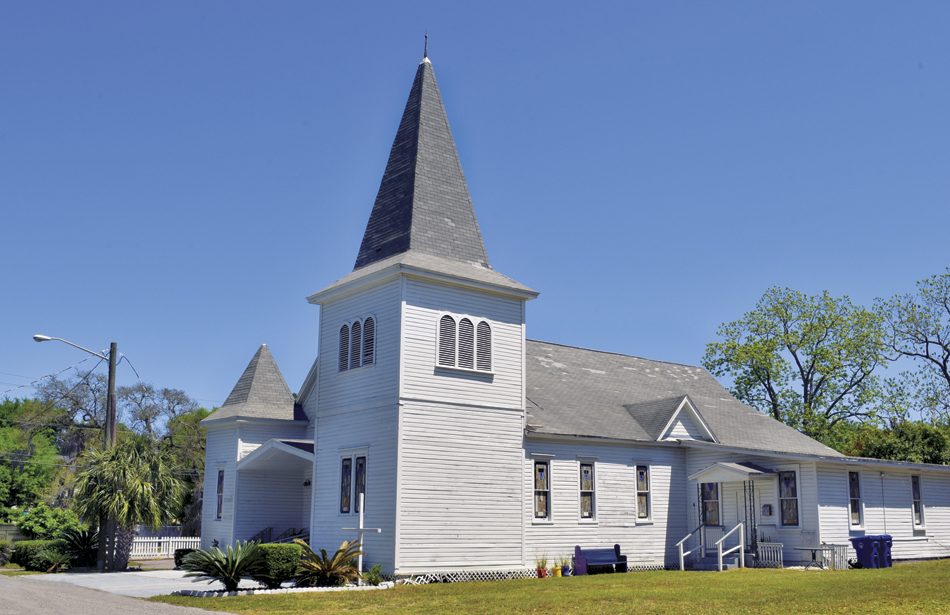 One of the oldest churches on Amelia Island, the Macedonia AME Church in Fernandina Beach is a vibrant, multi-racial community dedicated to serving those in need.

The corner of Beech and South 9th streets is the humble home of Fernandina Beach’s Macedonia AME Church. You’ve probably driven by and perhaps noticed the bold stained-glass windows or large white bell tower, but I’ll bet you didn’t know that this church is celebrating its sesquicentennial anniversary – or 150 years – in 2022!

First, let’s review a bit of history on the AME Church itself. AME stands for African Methodist Episcopal, and the congregation was begun in Philadelphia in 1787 as the first, independent Protestant denomination founded by African Americans. The momentum for the movement came when black members of St. George’s Methodist Episcopal Church were literally pulled off their knees while praying. In an effort to escape discrimination and with a vision of free worship, Richard Allen and Absalom Jones founded the AME denomination – the first denomination in the U.S. to be founded for liberty rather than theological distinction.

The AME Church was introduced to Fernandina Beach when Samuel Irving, an official with the AME Church in Philadelphia, arrived in town in 1870 and began prayer meetings for Blacks. In 1872, Irving formed and organized the Macedonia AME Church and laid a cornerstone at the corner of Beech and 7th streets. The community of believers became a significant center in the predominantly African American neighborhood, and the church continued to grow, constructing its current building in 1899, which includes the cornerstone of the 1872 structure. Today, it stands as one of the oldest churches on Amelia Island.On a recent cold January Sunday, I was blessed to worship with the Macedonia congregation, and they welcomed my family with open arms. The beauty of the AME Church is that they welcome and encourage members of all ethnicities, and Macedonia is no exception. It is such a treasure to see worshipers of all races, ages, and genders gathering in this historic building under the pastorship of Reverend Gary Slaughter, who leads the service with respect, honoring the Word of God and offering insight and light-hearted moments throughout the service.

In addition to Sunday mornings, the Macedonia congregation is busy being the hands and feet of God to the community by assisting the Coalition for the Homeless of Nassau County and the Racial Equality Coalition, as well as partnering with $1000 Start-up Small Business Program and Fairs. $1000 Start-up is a non-profit training and grant program, teaching people how to start, develop, and sell products and services.

The Church also sponsors many Black History Month programs and events. This year it is presenting “Soul of the Long Gray Line – A Telling of Untold Stories of the Black Cadets of West Point” by Mike Kegler, a local historian and West Point graduate, on Saturday, February 19 at 2 p.m. and Wednesday, February 23 at 6 p.m.

To celebrate its 150th anniversary, Macedonia AME Church is hard at work preserving its heritage. In fact, this month the church building will be named a historic landmark by the Fernandina Beach Historic District Council. The historical designation will allow the church to qualify for grants and funding from the State of Florida, which will underwrite capital improvements, including a desperately needed roof repair and replacement, interior repairs, and improvements to the community room and kitchen. When you have a chance to walk on the original hardwood floors of the church, admire the intricate woodworking adorning the entire celling, and see the treasured stained glass, it’s easy to see why this piece of our town’s history needs to be preserved.

The Macedonia African Methodist Episcopal Church welcomes everyone in the community to join them any Sunday at 10 a.m., to join in their special events, and if you feel led, to contribute to their restoration. To learn more, visit www.macedoniaamefb.org.