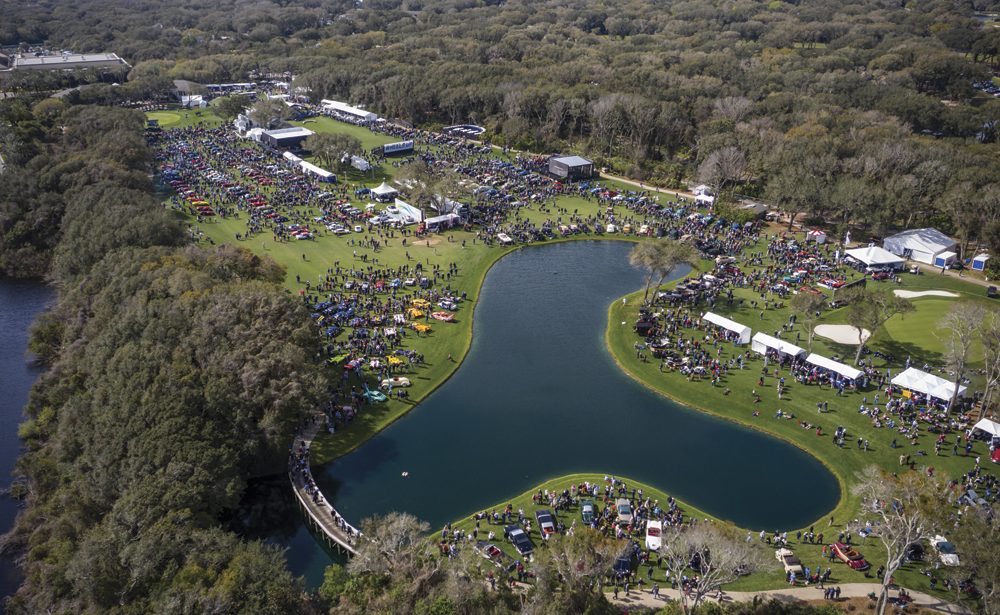 One of the world’s great automotive gatherings, this year’s Amelia Concours features Honoree Lyn St. James, the unmistakable roar of Chevy Thunder, the exotic Hispano-Suiza, and the Porsche 935.

Now in its third decade, the Amelia Island Concours d’Elegance is among the top automotive events in the world. “The Amelia” draws more than 300 rare vehicles from collections around the world to The Golf Club of Amelia Island and The Ritz-Carlton, Amelia Island, for a celebration of the automobile like no other! This year, The Amelia was moved from its customary second weekend in March to the third weekend in May.

Nearly three decades ago, Bill Warner, an antique car collector and writer/photographer with Road and Track Magazine, thought Amelia Island would be the perfect location to hold a Concours d’Elegance. Translated from the French, concours d’élégance is a “competition of elegance” and refers to an event where prestigious vehicles are displayed and judged. With help from Patti Hendrix of The Ritz-Carlton, Amelia Island, the first Concours was produced in 1996. It has grown dramatically over the years, attracting thousands of people to the island. Along with the public display of automobiles, the Concours offers various seminars, social events, and auctions, rounding out a fabulous weekend of exceptional autos, their owners, and car-lovers.

But things haven’t been easy for The Amelia during the pandemic, which attracts car enthusiasts from all over the world. “The realities of life during the pandemic have compelled us to reevaluate our format,” says Warner. “The biggest and most noticeable change will be fewer classes. I often get criticized for having too many cars on the field. Some even suggest that we have, and I quote, ‘too many race cars.’ Not guilty: you can never have too many race cars! I’ll make no apologies for being known by many as ‘the Racers’ Concours.”

LYN ST. JAMES HONORED AT THE 2021 AMELIA CONCOURS
This year, racer Lyn St. James will be The Amelia’s honoree, so expect a diverse mix of competition cars in the Cars of Lyn St. James Class. “Lyn is a poised and articulate spokesperson for motorsport and the business of motorsport, and she is possessed of an enviable work ethic, a deep and impressive competition resume, a dazzling smile, and a quick wit,” says Warner.

“Her racing career began in a Ford Pinto in the 1970s and had its grand finale more than two decades later in a special commemorative ceremony on the ‘yard of bricks’ at the Indianapolis Motor Speedway. Along the way, Lyn became the first woman to win Indy’s prestigious Rookie of the Year award and was named as one of the ‘Top 100 Women in the Automotive Industry’ by Automotive News and ‘Top 100 Women Athletes of the Century’ by Sports Illustrated.”

The Concours opens on Thursday, May 20 at 10 a.m. with the RM Sotheby’s Amelia Island Preview, held 10 a.m. to 8 p.m., at The Ritz-Carlton Ballroom, Ocean Front Lawn. This event is open to the public, and while you’re visiting, be sure to stop by The Shop at the Concours, held on the Concours Show Field.

At 3 p.m., the Amelia Island Concours Silent Auction will begin at 3 p.m., followed by the Guardians of Porsche Wine Maker’s Dinner at 6:30 p.m. This event is sold out, but if you would like your name added to the wait list, you may email Hilary Becker at [email protected] with your daytime phone number and the number of tickets you are requesting.

PORSCHE DRIVING EXPERIENCE AND SEMINAR WITH DALE EARNHARDT, JR.
On Friday, May 21, the Porsche Driving Experience departs from the Fernandina Beach Municipal Airport immediately following the 7 a.m. check-in and 7:30 a.m. drivers meeting with coffee and donuts. Participants will travel in their personal vehicles to a yet to-be-determined location, where they will enjoy activities to include an autocross in one of the latest Porsches and a spirited ride with a professional driver. The tour will also make a stop at the fabulous new Brumos Collection, which began as an eclectic private automotive collection that was stored on-site at the Brumos car dealership in Jacksonville. Many international and national award-winning cars, historical documents, and racing artifacts are housed in their new location.

The Reliable Carriers’ Eight Flags Road Tour returns at 8 a.m., beginning at The Ritz-Carlton, Amelia Island main driveway. Held from 8 a.m. to 4 p.m., the tour stops at various points on and around Amelia Island and concludes with a public display and lunch in downtown Fernandina Beach.

A seminar will be hosted by NASCAR Hall of Fame crew chief Ray Evernham from 3 to 4:30 p.m., celebrating Chevy Thunder, which was the GM Racing tag line during the 1980s. Panelists scheduled to appear to include Dale Earnhardt Jr.; double Daytona 500 Winner and 15-Time NASCAR Most Popular Driver, Herb Fishel, Director of GM Racing for 40 years; George Follmer, UOP Shadow Racing; and David Hobbs, 1972 SCCA F5000 and SCCA Trans-Am Champion.

CARS & COFFEE AT THE CONCOURS ON SATURDAY, MAY 22
Cars & Coffee at the Concours, presented by Revs Institute and Heacock Classic Insurance, returns on Saturday, May 22. Running from 9 a.m. to 1 p.m., Cars & Coffee allows individuals with vintage, exotic, and collectible vehicles to gather on the same show field used to display vehicles entered in the following day’s prestigious Concours d’Elegance.

Unlike Sunday’s main event, which is limited to a select group of vehicles with unique historical significance chosen to tell a thoughtfully-scripted story, Saturday’s Cars & Coffee at the Concours features a diverse group of vehicles that celebrate the automotive enthusiast’s spirit. Proud owners of beautiful collectible and exotic vehicles awake early, shine up their prized automobiles, drive to The Golf Club at Amelia Island and gather with like-minded enthusiasts on the first, tenth, and eighteenth fairways for a cup or two of fresh coffee.

RM Sotheby’s, the official auction company of the Amelia Island Concours d’Elegance, has set its auction date for May 22 in support of the new dates of the Amelia Island Concours d’Elegance. In light of current local and global developments, RM Sotheby’s is in full support of the Concours’s efforts and will likewise prioritize the safety of its clients, staff, and attendees. Celebrating their 23rd year, RM Sotheby’s 2021 Amelia Island auction will offer best-of-category examples across diverse segments of the collector car market.

Throughout the weekend, the annual Amelia Island Concours d’Elegance Silent Auction is not to be missed. A collection of unique, rare, and eclectic film, television, automotive, and autographed sports-related items can be found in this popular area of The Ritz-Carlton, Amelia Island. From autographed automobilia, original paintings, and celebrity autographed items to gift certificates from local and international destinations, there is something for everyone, including a section set aside just for children to bid.

For the connoisseur, fine jewelry, collectible watches, original art, and autographed limited-edition prints are available for sale. The goal of the weekend is to raise money for the Amelia Island Concours d’Elegance Foundation, a 501(c)(3) corporation. The foundation has donated over $3.75 million since 1996 to Community Hospice & Palliative Care, Spina Bifida of Jacksonville, Shop with Cops, and other worthy charitable organizations across North Florida.

A SPECIAL CLASS OF HISPANO-SUIZAS TAKES CENTER STAGE
A special class of rare, exotic and historic Hispano-Suizas is scheduled to be the classic centerpiece of The Amelia this year. “The Hispano-Suiza class for the 2021 Amelia Island Concours is an extraordinary group of famous, and in some case practically priceless, cars,” says Warner. “Cost was never an object with Hispanos, and it shows.
“While fewer than 300 survive, it’s still a grand tale. Many of the players in the Hispano-Suiza saga are royalty; there are war heroes, movie stars, all sorts of international celebrities and a few sports heroes. It all helps make Hispano-Suiza one of the most legendary, elegant, desirable and exotic cars in history.”

The Amelia is also presenting an eclectic and often ignored class of rare classic and special interest two-stroke motorcycles. “It’s as though 2021’s ‘Weird & Wonderful’ class somehow infiltrated our annual motorcycle class,” says Warner. “Many of these bikes are the centerpieces of happy memories. For some Baby Boomers, the ritual of mixing gas and oil for their first bike was a rite of passage.”

In addition, the Chevy Thunder class, dedicated to Chevy power, will honor the cars and engines that made history, invested the average American motorist with the luxury of power on demand, and created a muscular aura around Chevrolet’s iconic “bowtie” emblem.

“The design and execution of Chevy’s V-8 engines, especially the ‘small block,’ is elegant without being exotic or exclusive,” says Warner. “Simplicity, lightness, flexibility, compactness, and economy are its core strengths. It’s served long and well. And, of course, there’s that unmistakable sound. Anyone who’s ever attended a drag race, a NASCAR race, a Trans-Am, or a Can-Am has heard, and sometimes felt, Chevy Thunder. It’s the clear and unmistakable voice of American motorsports!”

As noted, the success of the Amelia Concours has allowed the Amelia Island Concours d’Elegance Foundation to generously support a variety of initiatives in northeast Florida since the event’s beginning. ‘The Amelia is about celebrating rare and historically-significant automobiles, but it is people that make it special,” says Warner. “Being able to give back to the local community makes all of the work that our Board of Directors, staff, and hundreds of volunteers invest worthwhile.”

“The past year has been difficult,” says Warner. “Through it all we have stood together, even as we made the decision to move the 26th Amelia Island Concours d’Elegance to May 20-23, 2021. We look forward to seeing all of you this month when we gather to celebrate the automobile and honor racer, writer, broadcaster, entrepreneur and motivational speaker, the inspirational Lyn St. James.”

For more information and complete schedule, and to purchase tickets for their various events, visit The Amelia’s website at www.ameliaconcours.org. You will find the most up-to-date announcements about the 2021 show, as well as everything that has happened over the Concours d’Elegance’s past twenty-five years. Since 1996, The Amelia has featured some very significant cars, drivers, and concepts. Feel free to go back in time to relive the highlights!