By Teri Sopp • Photo by DeremerStudios.com

The Silver Anniversary of the Amelia Island Concours d’Elegance will be held this year from March 5 to March 8 at The Ritz-Carlton, Amelia Island and The Golf Club of Amelia Island. The theme this year’s Concours is “Visionary Leadership Through Innovation,” honoring four such visionaries: “The Captain” Roger Penske, legendary designer Harley Earl, the Mercedes-Benz engineers who created the iconic Silver Arrow, and the team behind Porsche’s first Le Mans victory.

“In each of these instances,” notes Amelia Concours founder Bill Warner, “a culture has been created that accepts only the very best. The result is people who see themselves as members of an elite corps and work consistently to that high standard.”

Warner, who founded the Amelia Concours 25 years ago, has grown the event to four fun-filled days of automotive happenings, including automobile rallies, the popular “Cars and Coffee” gathering for local enthusiasts, lectures, historical collections, auctions and the final event—the Concours – at The Ritz-Carlton and on the fairways of The Golf Club of Amelia Island on Sunday, March 8.

“Concours d’Elegance” literally means “competition of elegance,” and the idea dates back to 17th-century France, where elegant carriages were exhibited and judged. Wealthy Parisians paraded their horse-drawn carriages in the parks on holidays. Eventually, the carriages became horseless, and the event was often held in conjunction with automobile races.

2020 Amelia Concours Honoree Roger Penske won his first national championship – Sportscar Club of America D Modified – in 1961, racing a Maserati T61 and a Cooper Monaco, earning him “Driver of the Year” honors from Sports Illustrated. He retired from the cockpit with a stunning record of 51 victories in 130 races. He also logged top-five finishes in another 60 races.


In 1966, he formed Roger Penske Racing, applying solid business practices and an insistence that every component of his racing organization be executed to the highest standards. Roger Penske Racing ultimately became Team Penske, which logged a stunning 18 Indianapolis 500 victories (a record), multiple wins in NASCAR, victory in the 24 Hours of Daytona and the 12 hours of Sebring, plus a trio of Trans-Am Championships. Penske delivered McLaren’s first Indy 500 victory in 1972 and Porsche’s first Can-Am title in the same year.

In all, Penske racers have earned more than 500 race victories, 591 pole positions and 34 championships. The five Penske Team Indianapolis 500 winners, including Team Penske’s first Indy winner from 1972 up through its 2019 winner, will be the center of attention at the Concours.

“The cars of the Indy 500 have been a Penske tradition for half a century,” says Warner. “These teams have made history. It is truly an honor to have them all at our 25th anniversary event.” Roger Penske is not only one of the most recognizable names in American motorsports, but a man who commands respect in the international racing community as well.

When he retired as one of America’s most successful young road racers in 1965, Penske was offered the ownership of a Philadelphia Chevrolet dealership. But racing remained a key element in Penske’s business plan. After forming Roger Penske Racing, he fielded Corvettes in the 1966 endurance races at Daytona and Sebring, then joined forces with driver Mark Donohue to campaign a Lola T70 in the United States Road Racing Championship and Can-Am sports car series. Penske Racing quickly found success with Donohue, winning two consecutive USRRC championships and three SCCA Trans-Am titles.

After three years racing sedans and sports cars, Penske Racing and Donohue made their debut in Indy car racing, running a pair of United States Auto Club-sanctioned road races in 1968. The following year, the team made its debut in the Indianapolis 500, where Donohue finished seventh and earned “Rookie-of-the-Year” honors.

With Donohue, Penske Racing quickly made its mark in the USAC Championship Series utilizing high standards of car preparation, presentation, and development. Donohue finished second at Indianapolis in 1970 and he recorded the team’s first Championship Car victory in the Pocono 500 on July 3, 1971.

Donohue earned Penske’s first Indianapolis 500 triumph less than a year later with an average speed that would remain the race record for a dozen years. Since then, Team Penske has become synonymous with Indy car racing, with more than 200 race victories, over 270 poles and 16 National Championships. Team Penske, however, is probably best known for its 18 Indianapolis 500 victories, four with driver Rick Mears and three with Brazilian driver Helio Castroneves.

THE CARS OF HARLEY EARL CLASS COME TO THE AMELIA CONCOURS

This year the show also honors the cars of designer Harley Earl, the first head of automotive design at General Motors. Earl, who is heralded as the father of the “tailfin design,” spearheaded the design and marketing of concept cars for General Motors. Earl was the director of a Cadillac dealer’s custom design shop when he was observed at work by Carl Fisher and commissioned to do a special project. The Cars of Harley Earl class features the great stylist’s most famous dream cars and successful productions cars. “Winnowing that group down was no simple task,” laughs Warner.


Eight decades ago, General Motors’ Art & Colour Section was the auto industry’s first attempt to invest the business of creating and selling automobiles with aesthetics as a marketable commodity. GM chief Alfred Sloan put Harley Earl in charge, and Earl changed the car business forever. Every American auto company followed his lead, employing designers who trained under or worked for Earl.

Earl created an industry within the biggest industry in the world, set the esthetic parameters for the American car industry, and led General Motors from a 12 per cent market share in the 1920s to a 55-plus per cent market penetration during the decade when he retired. For nearly four decades, Harley Earl was the arbiter of style for the entire American auto industry.

In the decade before he reached GM’s mandatory retirement age of 65, he oversaw the creation and the rise of America’s storied and celebrated “tailfin era.” “Misterl,” as his disciples called him, left his mark on the American industry and on the GM Technical Center at Warren, Michigan, the definitive monument to Earl’s towering contributions to General Motors and the automobile industry.


Mitchell was just 23 when Earl appointed him chief designer of Cadillac. His design of the 1938 Cadillac 60 Special was a landmark. But Mitchell was a “Buick man” long before he became a man. His father was a Pennsylvania Buick dealer, and despite being the design prodigy given the reins of the Corporation’s premier car division and style leader, Mitchell ached to draw Buicks.

Three years after returning to GM from Earl’s private design firm, he created the Buick Century X, a modified production car – “special order 90022” – a true factory custom with a lot of glamour. “Having the Century X on the field in the Cars of Harley Earl Class is the sort of thing we love to do,” says Warner. “Finding a rare and often obscure car that’s a solid part of automotive history entertains and educates. The Century X was found in pieces. Its restoration is an ‘Indiana Jones’ Class adventure story in automotive archeology. We’re grateful to the owner for allowing us to show it in the Cars of Harley Earl Class.”

In 1936, Mercedes-Benz created a racing department to design and build the mighty Silver Arrow—a department which created the template for professional racing operations and changed the grammar of racing car design, construction and management.

The Silver Anniversary of Amelia Island Concours d’Elegance also coincides with the fiftieth anniversary of Porsche’s first (of nineteen) victories in the world’s most important and prestigious sports car race, the 24 Hours of LeMans.

The LeMans, the world’s oldest sportscar endurance race, is widely considered the venue where endurance and efficiency shine brightest. Of course, it is also the subject of the new movie, Ford v. Ferrari, where Carroll Shelby’s famous Ford beat Ferrari. Under the direction of Porsche Chief Ferdinand Piech, the Porsche 917 won in 1969, then again in 1971.

The international rules for endurance sports car racing were rewritten in 1972; Porsche turned their attention to North America’s unlimited Can-Am Championship, turbocharging the 917 and forming an alliance with Team Penske. That coalition swept through the mega-dollar/mega horsepower Can Am series winning back-to-back titles in 1972 and 1973.

A RARE LOOK AT THE LOZIER

A special class of Loziers will help celebrate the Silver Anniversary Amelia Concours. More than a century since Lozier left the American car catalog, Lozier is among the rarest of collectible cars. They were also the most expensive American automobile of the “brass era” and a rival of Rolls-Royce.

But for the production strategy of Howard Marmon and Ray Harroun, Lozier may have occupied a platinum-plated niche in American history. They were fast and powerful cars. In 1911, Teddy Tetzlaff logged a stunning 100-mile speed record in a stock 49-horsepower Lozier at nearly 90 mph!

Indy star Ralph Mumford won the 1910 305-mile Elgin Trophy plus the 1911 Vanderbilt Cup at Savannah at the near Indy 500-winning speed of 74.076 mph over a pair of Mercedes with his four-cylinder Lozier Type 46. That same summer, Lozier won the Fairmont Park (Philadelphia) round of the AAA National Championship and was named “Stock Car Road Champion of the World.”

The most telling numbers in Lozier’s catalog were prices. When the average annual salary of an American worker was $750 and a Cadillac left the showroom for $1,600 and a Packard for $3,200, Loziers wore price tags as high as $7,500, a hefty six-figure price in today’s money.

Lozier understood that their market was limited. Annual production peaked in 1912 at 600 cars. One year later, Lozier introduced the 88 horsepower Big Six with electric lights and a $5,000 price tag. That same year Lozier’s lead engineer left to form his own company. Tellingly, he took several key men with him to make high-quality cars below Lozier’s lofty prices.

Lozier never recovered. In 1915, the company declared bankruptcy after building just a few thousand cars in a decade and a half. “Lozier might be the most ‘American’ marque of all,” says Bill Warner. “Loziers are big, fast, powerful, expensive and built to uncompromising standards. Yet now they’re all but unknown. They are rare and glorious cars; only about 30 are thought to exist in America. They deserve a special place on The Amelia’s Silver Anniversary field.”

“The Amelia is about celebrating rare and historically-significant automobiles, but it is people that make it special,” says Warner. “Being able to give back to the local community makes all of the work that our Board of Directors, staff and hundreds of volunteers invest worthwhile.” 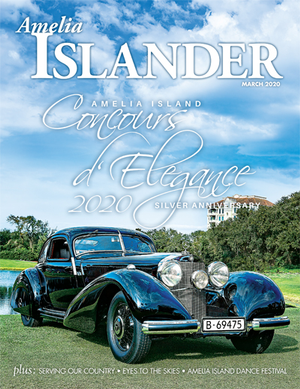