A few days ago, I stepped into the Amelia Tavern to meet my friend, Russ, and see what was happening on the downtown scene. Russell was waiting at the bar and he was already getting an education from bartender Ian Kitch, who turned me on to what exactly is new downtown: Amelia Island Brewing Company. Since February this year, Amelia Tavern has been exclusively serving beers produced in their own in-house brewery. After a couple of false starts early on, the gleaming tanks are turning out delicious beers to delight the palate of both the casual beer drinker and the discerning aficionado.

Before I could order, I noticed general manager Ed Howell behind me with brewmaster Jay Mack, the gentlemen Russ and I had come to meet. Jay was in the middle of transferring their upcoming Summer Shandy from one of the fermentation tanks into the brite tank, where it will be carbonated. Having never been so close to the process, I was taken in by the aesthetics. It’s easy to see how someone could get into the art and science of brewing beer, but it takes someone with real determination and a sense of pride to dedicate your life to the craft, then move from Nebraska to Fernandina Beach for an opportunity to establish the only local brewpub exclusively featuring its own product. Jay Mack is that person.

After our impromptu tour, we returned to our high-top table to enjoy some frosty adult beverages. We ordered a couple of appetizers, and Jay selected a few beers for our consideration. A flight of four 5-ounce glasses soon followed, a taste of the Amelia Tavern. First, we tried the Tavern IPA, an English IPA, meaning it has been fermented with English ale yeast, bringing noticeable fruity esters, this one with orange and cantaloupe, and strong flavor from the hops. Its tartness paired well with the A.T. Pretzel, served with beer cheese and horseradish mustard.

Second, we tried the Sm’kn M’rtha, a classic porter whose malts are smoked with cherry wood. With it, we enjoyed the Cola BBQ Chicken Wings, served hot and crispy, with a sticky sweet glaze making a perfect partner to the slight hoppy bitterness. Next, we sampled the Sarbi Mocha Porter. This dark and delicious brew had hints of coffee and rich caramel. The Sarbi Mocha Porter is not only delicious, but it is also a community service. For each pint sold, one dollar goes to support Keep Nassau Beautiful and Micah’s Place.

Our final beer in the flight was the Dragonslords 6, a Double IPA, a distinctly American-style India Pale Ale. Like most things American, double or “Imperial” IPAs are not subtle, nor is the person for whom it is named, Major Rossi-Cayton, the first female to fly a combat mission in the U.S. military. The Amelia Island Brewing Company at the Amelia Tavern is doing big things. When I asked Ed what he wanted me to share with our readers, without hesitation he responded, “We brew beer!” Find them online at the www.ameliatavern.com or at Centre and 4th Streets in Fernandina Beach. While you’re there, look into becoming a member of their Tapstar Keg Club and be the first to taste what’s new. 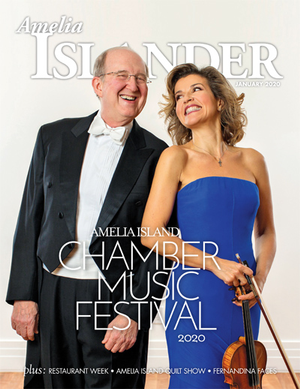